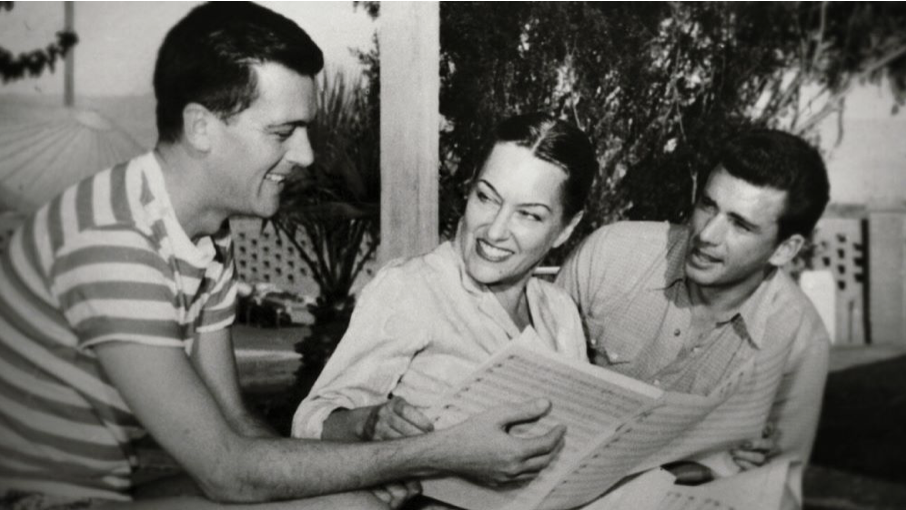 One of my favourite genres is the Hollywood behind-the-scenes story. While I admit to finding far more interest in the mechanics of filmmaking (who did what, what went wrong, etc.) as opposed to the true(?)-life soap opera drama that has long propelled tabloids and gossip for generations, I’m not completely adverse to the relationship drama that can often rival what ends up on screen. The Emmy-winning Jeffrey Schwarz has covered such stories for many years with subjects ranging from Tab Hunter to Stan Winston to Joan Crawford. For his latest project, he covers a love triangle between someone you’ve likely heard of (Gloria Swanson) and two people you haven’t (Richard Stapley & Dickson Hughes) in Boulevard! A Hollywood Story.

From the clues so far, you might be banking on this documentary revolving around the 1950 classic film Sunset Boulevard. What this tale in fact concerns is an unrealized stage musical adaptation of the film spearheaded by Swanson herself, who hoped to extend her time in what has since become by far her most famous role: fading silent era actress Norma Desmond. To assist in this endeavour, she recruited songwriting partners Richard Stapley & Dickson Hughes, the former of whom was also a rising star at MGM.

Having secured verbal permission for the rights to the story, the trio formed a tight unit, working for months in 1955 on a treatment and score which they ultimately hoped to mount on Broadway. During these extended jam sessions, Gloria began to take an intimate interest in Richard who was some 24 years her junior. And before you think life has completely imitated art, there was one wrinkle in this fabric: Richard and Dickson were in fact a romantic couple, an ocean-deep secret in 1950s polite society.

As temperature and tensions rose, the partnership began to fray and ultimately dissolved as Richard eventually rejected Gloria outright. By this point, the project had stalled due to Paramount rescinding rights permission and the three partners ultimately went their separate ways, Richard retreating the farthest to England where he continued his acting career.

The remainder of the film tracks the three strands of ripple effects that followed our subjects for the remainder of their lives (all three have since passed on). Schwarz deftly brings this forgotten story to life with a cunning mix of animation, archival clips and expert interviews ranging from surviving friends and family to cultural historians to the subjects themselves, in particular a 2006 interview conducted with Stapley before his death.

Schwarz’s doc is a handsome production to be sure and does justice to its subjects. The trouble is, the central story just isn’t all that interesting. Gloria Swanson having a near-affair with a gay man merits more a chapter than the entire volume it’s given here. Much of the film’s second half feels like padding as it goes into the subject’s post-collaboration lives, whether they intersect with the past or not. This could certainly have merited a documentary short for it nearly buckles as a feature.

Boulevard will prove to be catnip for golden-age Hollywood geeks and LGBTQ historians. Everyone else should settle for a rental.

Boulevard! A Hollywood Story was screened as part of the Vancouver Queer Film Festival (VQFF)