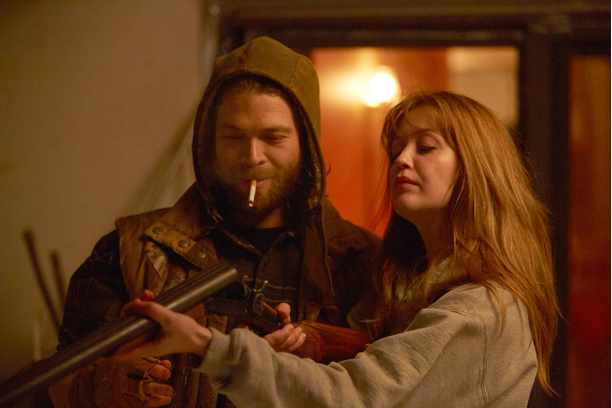 Even as the human population continues to expand exponentially, there are still vast swaths of land where a man can find himself cut off from most human contact. Self-enforced isolation can lead to a blurring of the lines between the laws of man and animal, especially when a woman enters the picture. Such a slice of cabin fever plays out in Ana Valine’s sophomore feature, Once There Was a Winter.

Leaning more on archetypes, Valine forgoes naming her characters including protagonist pipe welders Lady (Kate Corbett) and Welder (Teach Grant) who have just finished work on a remote Northern Alberta gas line and are heading home for the day with a couple 12-packs of beer in tow. Welder wants to make a detour to deliver a letter to his brother Hunter (Juan Riedinger) at his backwoods cabin. But what was meant to be a short stopover soon becomes an extended stay as Hunter insists the pair have a few rounds with him and the tight-lipped Plumber (Kris Demeanor), his lone cabin companion.

Hunters rough gregariousness wins over Lady who is perfectly content to unwind for a bit as the outdoorsmen show her the finer points of making shotgun shells and firing them, despite Welder’s reservations. As the night begins to wear out it’s welcome, it becomes clear that Lady has unwittingly become a pawn in a dangerous game of unfinished business between the three men and it will take more than sheer wits and grit to survive.

Once There Was a Winter evokes past claustrophobic thrillers Funny Games and The Sadist mixed with Deliverance-esque trappings. While the audience may expect the film to slip into generic cat and mouse conventions, the script is far more nuanced with its characters always a couple steps ahead of the viewer. Even by the (literally) chilling conclusion, you’re still not spoon-fed the entire story, but just enough to fill in the blanks with satisfaction.

The small cast is perfect with nary a false note among the foursome. Corbett shines as a woman in a man’s world both on and off the clock. She may be in over her head, but knows just enough moves to stay ahead of her foes. Riedinger slow burns as the thinly disguised wolf-in-sheep’s clothing. His subtle weaving of rough-hewn charm and menace keep the audience just uncomfortable enough that the spikes are all the more satisfying when they arrive.

Cinematographer Michael LeBlanc keeps his camera steady for the most part, resisting the urge of many a thriller before him to rely on shaky close-ups to ratchet up tension. The actors here certainly don’t need the help. Bonus points to the production for successfully wrangling live wolves for the shoot.This isn’t always easily accomplished and the results outshine CGI almost every time.

Once There Was a Winter is ultimately a thriller for adults that respects its audience enough to make them work to unlock the film’s machinery, but not so complicated as to present a hopelessly intangible mess and call it art (have I ever mentioned I don’t care for experimental?). It’s a chilling ride, but hopefully your theatre will have central heating.

Once There Was A Winter screens as part of VIWFF on Thursday, March 7 @ 6pm, Vancity Theatre