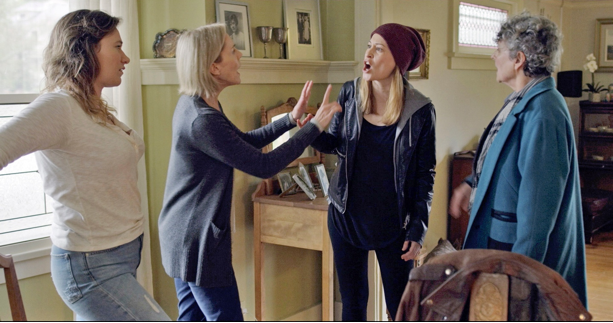 Anyone who has made the drive from Vancouver to Burnaby is likely to be familiar with the diagonal thoroughfare that cuts through the orderly street grid. Originally built to connect Vancouver with New Westminster, Kingsway encompasses several neighbourhoods and is an oft-unexplored area of Van, at least cinematically. Local auteur Bruce Sweeney settles in among the denizens of southeast Vancouver and what makes them tick in Kingsway.

Literally minutes after declaring himself cured and walking out on his therapy session, Matt (Jeff Gladstone) accidentally discovers his wife Lori (Colleen Rennison) cheating on him at a local motel on Kingsway….at least he’s pretty sure that’s what he saw. His anxiety and depression keep him from confronting his spouse, but headstrong older sister Jess (Camille Sullivan) is having none of it and with their sweet mother Marion (Gabrielle Rose) in tow, immediately launches an investigation into Lori’s alleged infidelity.

Like trying to navigate the titular street, Jess’ sleuthing leads to more twists and turns than she and her hapless family suspected. Old wounds open, sexuality is explored, limits are tested and expectations challenged as the family dynamic is forever shaken up and altered…but perhaps for the better.

Building on previous work like Dirty and Last Wedding, Sweeney has crafted an intimate human drama that is just as capable of tickling the funny bone as it is breaking the heart. He’s assembled a fine cast who positively shine in roles far removed from the usual supporting parts on American TV where BC actors are usually found.

Camille Sullivan is an exceptional stand out here as she grafts multiple dimensions onto Jess in a performance hopefully bound for a Leo nomination. A mechanic on the cusp of a mid-life crisis, she was neglected her own love life to focus on building her auto shop and keeping her family afloat. She puts on a strong front for the sake of her kin, but keeping her own problems bottled up will burst out eventually and indeed they do with awkward (and rather amusing) results.

The ever reliable Gabrielle Rose is in top form here as the loving-yet-exasperated Marion. Having nearly abandoned all hope of ever seeing grandchildren from her offspring, she accidentally re-ignites her own sex life in a subplot which nearly steals the show! Colleen Rennison re-surfaces after a two-year absence from the screen in what could have been a rather thankless role as the unfaithful Lori, but deftly sweeps the audience up in her own plight of a sudden pregnancy which carries a heavier burden (pun intended) than all the other characters combined.

Bruce Sweeney proves once again that he can assemble a fine cast and knows how to use them. Kingswayis a solid example of the fine use of talent BC films are capable of showcasing. It is a shame however that it seems to suffer from a similar problem with many other Vancouver indie films. Maybe it’s all the television work we do for our day jobs, but films like this (Mina Shum’s Meditation Park is another example) often feel like they never take fully advantage of the larger screen they’re projected on. Vancouver’s vistas are never shown off and everything feels contained like it’s still trying to be set in the US and is afraid it’ll get caught. I hope the next generation of local filmmakers gets over this. It truly does keeps otherwise excellent BC films like this from being all they can be.