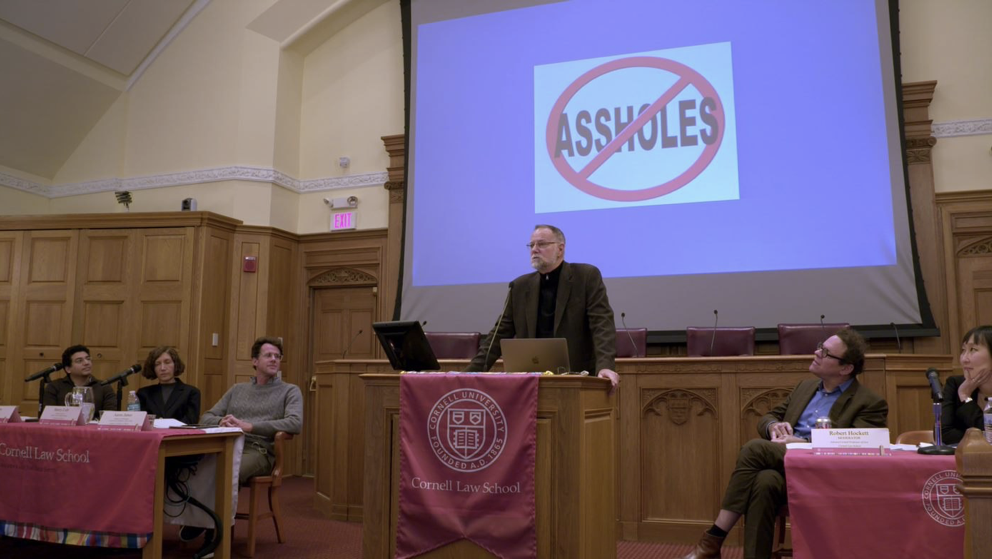 “It’s not just a theory, it’s a reality!” proclaims one of the street interviewees of Assholes: A Theory, John Walker’s filmic take on the book of the same name by Aaron James. It’s certainly that way for most of us as very few have gone through school, work, or life in general without encountering an asshole of some kind (those who claim otherwise may require a look in the mirror). It’s almost as if the most successful folks in politics, business and popular culture both attain and maintain status via a long-honed blend of narcissism and indifference. Assholes attempts to mine why this is.

Through a dubious combination of expert and unidentified street interviews, the film covers about as many topics as its 82-minute runtime will allow. From asshole behavior in general and toxic workplace culture in the RCMP to out of control social media technologies and how they help hand rich narcissists the keys to an entire country (the last one is not who you think). There’s just enough material here to give viewers a taste of the “teeming asshole ecosystem” as the book’s author Aaron James puts it.

Once you get through the giggles of hearing “asshole” spoken aloud so many times (what did you expect?), the film does delve into some serious and disturbing consequences of such behavior. Particularly striking is the segment on RCMP workplace bullying and harassment of which former Constable Sherry Lee Benson Podolchuk gives a harrowing account. This segment deserves its own doc really. The segment on Big Tech and its unregulated and un-checked power over personal data and modern discourse is rightly given due scrutiny. The weight of these topics is rather clumsily balanced with random talking heads whom are given far more screen time than necessary. If I want some random asshole’s opinion, There’s plenty to choose from offscreen.

The film seems short on solutions to this problem as well with only a short segment on financial firm Baird’s successful “no-assholes” hiring policy giving us any ray of hope. The section on big tech was also underutilized as social media and online culture have significantly fueled modern day…ass-holery to borrow the film’s vernacular. It’s often online where we encounter the bulk of this behavior (didn’t we log on to escape from this?) and a closer examination of how even the best of us can show our worst selves online would have certainly strengthened the film’s message.

The subject of Assholes: A Theory may have ultimately been better served by an update of the 2012 book rather than this lukewarm screen version. It’s a rather broad and subjective topic that really requires a deep dive and diverse commentary beyond the scope of a 90-minute doc. And if anyone thinks I’m being an asshole for saying so, remember that an asshole doesn’t know they’re being one (That would, in the film’s words, be a prick).

Assholes: A Theory screens as part of VIFF at International Village on Wed, Oct 2 @ 9pm.