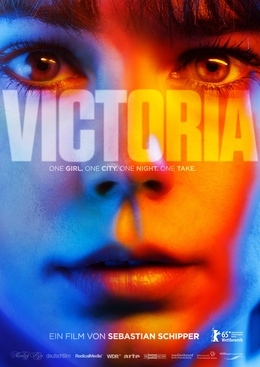 Concluding at NWFF was the one-shot German film, Victoria. I guess the final night was German night or something. Also interesting how these one-shot movies are really catching on.

It starts out with Victoria (Laia Costa) who has recently come to Germany from Mexico and is enjoying herself at a club. As she is on her way out, she runs into a man named Sonne (Frederick Lau) who decides to show her around with his three drunkard friends Boxer (Franz Rogowski) Blinker (Burak Yigit) and Fuss (Max Mauff). After stealing some beer from a store where the clerk is snoring away, the four men take Victoria to the roof of their condo where they enjoy themselves even more than usual. Eventually Victoria has to head to her cafe job where she has to open up in a few hours. Sonne escorts her over to the cafe and they spend some time together enjoying drinks and playing the piano. Suddenly, the other three guys just happen to come over and need a fourth person for a special mission because Fuss has gotten so smashed, he’s passed out too soon. Being such good friends, they leave their drunkard pal in the way back of their van and pick up Victoria, because this “errand” needs four people. And this errand just happens to be robbing a bank. What could go wrong? Just about anything, actually.

This film was pretty good, for a one shot. The camera might’ve slipped a couple times, and it’s hard to believe this was all in one take. I was almost under the impression that it was a guy recording the whole scenario with a cellphone camera and nobody noticing him. It must’ve taken some serious practice to get something like this made. It just so happens a lot of the dialogue was actually improv, pretty impressive improv too, I might add. Even the lighting was almost perfect. Hardly any grain throughout the night. I have to wonder what half the town thought about people improvising drunken behaviour at 4:00 to 5:00 in the morning though.

“Victoria (2015 film) POSTER” by Source. Licensed under Fair use via Wikipedia.