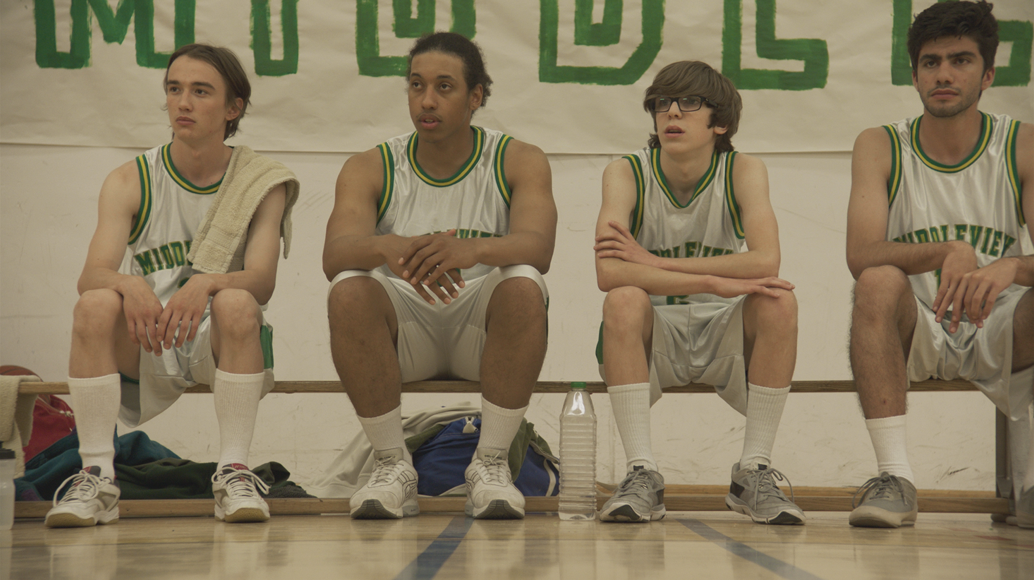 What’s a sports movie that features everything but the actual sport? The modern substitute for tribal warfare tends to generate more than a few subplots in it’s periphery and it’s on these bench-warming events that director Ted Stenson chooses to focus his frame on in Events Transpiring Before, During, and After a High School Basketball Game.

Title forthwith shortened for the sake of brevity, B-Ball depicts a struggling Calgary High School team in 1999 who seem more content to discuss the existential merits of the recently-released Matrix rather than come up with a winning strategy against a team that can dunk them straight out of the division. High-spirited assistant coach Brent (Andrew Phung) is sure he has the answer in the form of a “triangle offence” gleaned from the Chicago Bulls playbook, much to the exasperation of the reserved Coach Davidson (Paul Cowling).

As the off-screen game dribbles on, the radically-minded theatre department led by Marxist-in-training Danica (Ivy Miller) is preparing a protest of their play being shut halted by administration. They’ve narrowed their options down to streaking through the game or pouring pig’s blood on the court. They may get away with it too as the game is one official short with harried ref Ken (Jay Morberg) combing the halls for his wife’s lost dog. Will there be any real winners by the final buzzer?

B-Ball unfolds primarily in proscenium with minimal coverage, allowing the mostly amateur cast room to construct a satisfying degree of verisimilitude. These efforts are slightly hampered by the inclusion of Phung in the cast who unfortunately brings a little too much Kim’s Convenience sitcom energy to the proceedings and sticks out in all the wrong ways.

The film is one of those slice-of-life dramedys that acts like it has something to say only to shrug its shoulders at anything interesting. Too cool for school? In any case, it all seems to add up to a a very paint-by-numbers affair, with the final seconds being especially predictable.

There’s certainly some fun and laughs to be had in B-Ball. As with all films that have fallen victim to the COVID-induced virtual festival curse, I can’t help but wonder of my opinion of the whole thing would’ve been improved by witnessing it with an audience. Guess I can always re-watch The Matrix in the meantime.

B-Ball can be screened virtually as part of the Victoria Film Festival (VFF) from Fri Feb 5 to Sun Feb 14 @ victoriafilmfestival.com