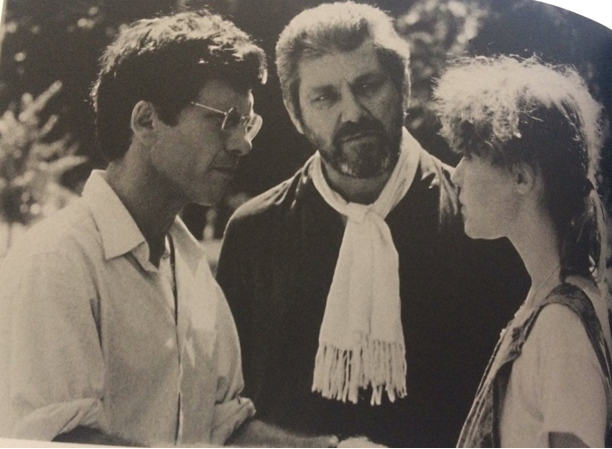 A lot can happen in twenty years. One generation grows old and a new one grows up, often feeling the same angst in new circumstances. At times we vow never to end up like our parents, but how much of our fate is simply cyclical? Don Owens seems to be asking this and more in his 1984 drama, Unfinished Business.

It’s been nearly two decades since nobody waved goodbye to Peter Marks as he lit out on the highway hoping to escape his troubles. We pick up with his daughter Izzie (Isabelle Mejias) living with her mother Julie in early 80s Toronto. Peter is still in the picture, only he and Julie have long-since divorced. Izzie has spent the last few years as a latchkey kid with her mother working long hours at the radio station and seeing fer father only at the occasional lunch . Feeling a lack of direction with final exams just around the corner, she soon finds a cause in young mechanic Jessie (Peter Spence) who introduces her to the burgeoning anti-nuclear movement.

Soon Izzie has run away from home, changed her look, and begins marching with her newfound community at protest rallies targeting weapons manufacturer Gelstar Industries, one of which results in her arrest. Now increasingly estranged from her family and her old friendships fraying at the seams, Izzie’s new direction is put to the ultimate test when she discovers her compatriots employing tactics which could put far more lives at risk than the weapons they’re fighting against.

The movie is a far different animal than it’s predecessor, sporting a bigger budget, cast and colour photography this time around. The sequel is a solid update to the themes of teenage angst and alienation presented in the original. The stakes are now higher with the scope expanded to include potential nuclear annihilation during the cold war. One can’t help but draw parallels between the passionate activism seen in the film and the currently ongoing demonstrations at Burnaby Mountain against the Trans Mountain pipeline. Same drive, new problems.

While this all gives the film some juicy themes to chew on, the dated execution is dripping in 80s excess, often to the story’s detriment. The film is peppered with impromptu music breaks (Parachute Club features heavily here with their new wave hit “Rise Up”) and even a clothes-shopping montage which rolls the eyes more than it pleases them.

Luckily, the performances from the cast are mostly top notch with Isabelle Mejias injecting compelling pathos into her leading role. She is relatable without ever devolving into stereotype and with a strong turn from Peter Spence as boyfriend Jessie, this onscreen duo leaves an impression on the audience that John Hughes would be proud of. Peter Kastner and Julie Biggs provide strong support as the life-weary parents whose lives didn’t turn out quite as planned. Peter has since married into a new family after the divorce and settled into a 9-5 routine directing commercials. His youthful persona is still there, but he was long-since outgrown his old dreams. Julie almost seems a shell of her former self now juggling life as a career woman and single mother.

The last act finds our protagonist in a similar place as her father in the last movie. It seems that even as times and places change, some archetypes remain the same. While this reviewer wishes that the director had kept the proceedings a little more character-focused (Seriously, what’s Parachute club doing here??), Unfinished Business is a surprisingly robust echo of the story that proceeded it that works just as well on it’s own as it does as a sequel.

Next Week: HOLLYWOOD’S CANADA-Suzannah and the Mounties