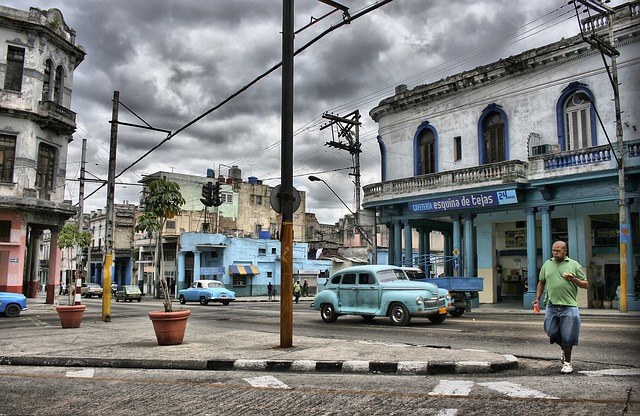 I never thought I’d see something from these folks again, but hey, as long as their short films are being funded, I guess they’ll keep on going, despite their weirdness.

And that’s one thing that hasn’t changed: The weirdness. The first two minutes feature some cloth thing that’s lit up with orange and yellow lighting while some huffing noise and ominous music can be heard in the background. I don’t understand a thing. After that whatever, we go to our main character Paul (Mathieu Dufresne), a Nicolas Cage lookalike who struggles to keep a smile. But that is impossible because . . .  nobody quite knows why. Especially considering he’s on a trip in Havana and hanging out with some interesting people. He even hangs out with a hot girl. Then they make out. And there isn’t much else to say, because despite being in Havana, we don’t get treated to a super elaborate story about buddy cops and adventure.

Like most films from Travelling, there isn’t an awful lot of story or plot. The lighting is cool and ominous at times, and other times it’s hard to see what and where something is in the shot.  Mainly the dialogue was between minimal and medium, and the film ended on a long continuous long shot with hardly much of a resolution at all. Shorts from this company don’t usually bother to tell much story, but that’s just how it is, I guess. Maybe some of the writers aren’t too big on storytelling.