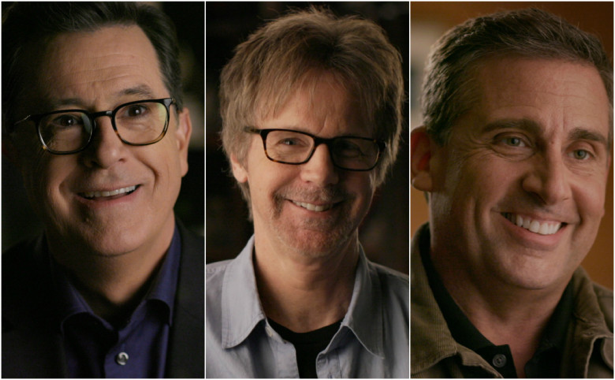 Titanic was unsinkable, Hillary Clinton was to be the 45th U.S President, and The Dana Carvey Show was to revolutionize ABC’s primetime television line-up. But even with all the hopes, prayers and talent in the world, some things just aren’t meant to be as told in comically frank detail by the talent who lived it in Hulu’s new doc, Too Funny To Fail.

It may be hard to imagine, but there was a time where Dana Carvey was at the top of the world and guys like Steve Carrell and Stephen Colbert were absolute nobodies. Having just come off a record-breaking run on SNL and box office success with the Wayne’s World movies, Carvey was seeking new worlds to conquer and after turning down David Letterman’s old late night time slot, an offer to make a sketch show for ABC’s primetime lineup seemed to fit the bill.

Teaming up with SNL writing alum Robert Smigel, the two men scoured SNL audition tapes and industry contacts to build a crackerjack team of writers and performers including the aforementioned Carrel & Colbert, Louis CK, Charlie Kaufman, Robert Carlock (30 Rock), Jon Glaser (Late Night with Conan O’Brien), Dino Stamatopopoulos (Community), and Spike Feresten (Seinfeld). This young and hungry group of talent sought to smash boundaries and shatter standards of good taste with outrageous skits such as Breastfeeding Bill Clinton, If I Only Had an Ass, Waiters Who are Nauseated by Food, and the Ambiguously Gay Duo (which later became a hit on SNL). With the level of silliness dialed way past eleven, everyone was having the time of their lives…….except for ABC’s primetime audience.

The network had placed the show in a time slot following one of their most popular programs at the time, Home Improvement. Needless to say, the family audience that followed along with this show was not ready for the outrageous and controversial content presented by Dana Carvey & Co and promptly tuned out within minutes of the premiere episode. The network panicked, the sponsors fled (the first episode was presented by Taco Bell and 6th by the single-restaurant Schezuan Dynasty!), and the Dana Carvey Show was officially history after eight episodes produced, with ABC not even bothering to air the finale, instead replacing it with a special episode of Coach.

It may have been the end for the show, but it was just beginning for those who worked on it as many have since become household names with several arguably now more famous than Carvey himself ever was. Most are here to recount their whirlwind experience on this zany program with Carvey, Carrell, and Colbert taking centre stage. While there is some melancholy in the air on how the show failed to find it’s audience, all the participants seem grateful for having been a part of it as the experience left them ever more confident and fearless in their careers going forward which has clearly paid off for most of them. Carvey himself doesn’t seem to bothered by the outcome as going back to stand-up allowed him to be more present as a father. Louis CK is a noticeably absent given his prominent role in the show’s writing and creation although this may be to the film’s benefit given recent controversy surrounding the comic.

The film is slickly produced, handily balancing talking heads with ample clips of the Dana Carvey Show along with other associated media from behind-the-scenes antics to Colbert’s hilariously desperate audition tape featuring his baby daughter! A sense of humour is present throughout the proceedings, even poking fun at the status of the interviewees with Colbert billed as a “former un-employed actor” and Robert Carlock identified as an “inexpensive writer”.

Every career has to start somewhere and The Dana Carvey Show was that stepping stone for many of today’s top comic talents. Director Josh Greenbaum has fashioned an engaging look at what caused a promising program to end up as a failed experiment and how the success of it’s participants ensured it would not be relegated to a mere footnote in comedy history. The series itself is now readily available on multiple platforms and this entertaining doc has encouraged this reviewer to check it out!

Too Funny To Fail has it’s Canadian Premiere on Saturday, March 3 as part of the Vancouver Just For Laughs Film Festival.