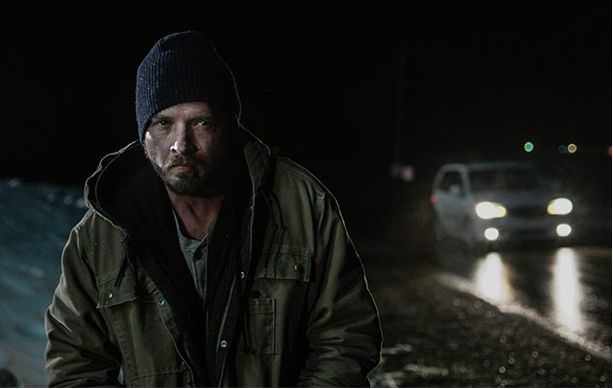 The concept of an invisible human walking amongst us has been a faithful plot device in science fiction dating all the way back to the Ring of Gyges story by Plato to the more contemporary “Invisible Man” series from Universal Pictures. Often a tool or curse utilized by superheroes and mad scientists, the concept is given new life by Vancouver makeup artist-turned-director Geoff Redknap in his debut feature, The Unseen.

Deep in the B.C interior, Bob Langmore (Aden Young), toils away at a backwater lumber mill while mostly keeping to himself. We soon learn the cause of his isolation when a removed bandage reveals his body to be slowly becoming invisible, mostly in patches. Bob seems content to let himself slowly fade away until he receives word from his ex-wife Darlene (Camille Sullivan) that their teenage daughter Eva (Julia Sarah Stone) is on the verge of dropping out and skipping town.

With his truck out of commission, Bob accepts an offer from local drug kingpin Crisby (Ben Cotton) to have his truck fixed in exchange for running a package to Vancouver while he’s away and return with another from the supplier. Bundled in heavy clothes and bandages to disguise his ever encroaching invisibility, Bob attempts to reconcile with Eva only to have her mysteriously disappear after a visit to the local sanitarium where Bob’s father was interred.

With his condition slowly eating his body away from visibility and Crisby breathing down his neck to get the job done, Bob must race against time to find his daughter before it’s too late. What he discovers along the way however, will have lasting ramifications for him and Eva as long buried secrets behind his condition are revealed.

The Unseen takes a high concept trope and effectively weaves it into an ambitious thriller. Invisibility in fiction traditionally has a distinct cause behind it from magic rings to dangerous elixirs. The decision to transpose this into a more blue collar setting is an inspired choice that is magnificently realized by Aden Young’s superb performance as well as an astonishing mix of practical and visual effects that will have to shuddering in your seat as Bob’s body is slowly eaten away over the film’s runtime.

Young is backed by an excellent supporting cast with Camille Sullivan especially standing out as Bob’s harried ex who takes what could have been a thankless two-dimensional role and instead nearly steals every scene she’s in with it. It’s not award-winning performances all around however as I was violently jarred out of the film by the subpar characters of Benji and Oggy. Introduced as friends of Eva, these clowns seemed to have wandered off the set of a bad after-school special. I’m not certain whether bad writing or acting is the main culprit, but given the excellent talent on display elsewhere, I expected better.

I should also note that the film is slow to gain traction with it’s invisibility plot device. It’s seen only fleetingly in the first hour and talked about in hushed tones, even in places where it should be out in the open. One almost forgets that invisibility is a plot point. The film doesn’t necessarily need a bigger budget to remedy this, just less timidity with it’s more sci-fi elements.

During the Q&A that followed the screening I attended at the Rio Theatre, I couldn’t help but notice the filmmakers toot their own horn about how distinctly “Canadian” they had made their film. I’ll have to respectfully disagree with their assessment as the film evokes a passing nod to it’s location at best. Passing mentions of the PNE and Pender Street are joined by barely-visible BC licence plates that hardly make up for never saying the words “Canada”, “BC” or “Vancouver” out loud, the latter referred to only as the “big city” by one character. I suspect they made the film just Canadian enough for locals to get the references, but ambiguous enough for an American audience to place it in their own backyard. Whatever. It was annoying when Orphan Blackdid it and it’s annoying here.

Genre and setting complaints aside, I do have to commend Redknap and Co for crafting a unique take on the invisibility sub-genre. The door is left open for a follow up and I wouldn’t hesitate to see where it leads should one materialize.

The Unseen screens next at The Globe Cinema in Calgary on Friday, July 20 @ 7pm