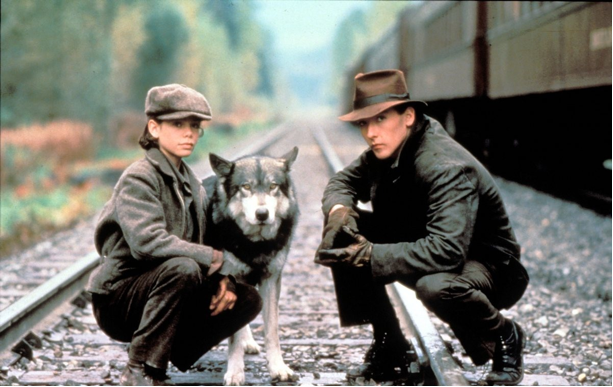 After using the Canadian wilderness for a series of nature pics in the 1960s including Nikki and The Incredible Journey (reviewed here), the Walt Disney Studios would return to Canada in the 1980s for settings (Never Cry Wolf), acquiring content (Running Brave) and once again as a filming location as British Columbia doubles for wide swaths of America in 1985’s The Journey of Natty Gann.

In the depths of the great depression, 15-year-old tomboy Natty (Meredith Salenger) lives with her widower father Sol (Ray Wise) in 1930s Chicago. Sol has gained a reputation as a rabble rouser in town by advocating for the rights of the working class, a rebellious nature his daughter has inherited. He finally manages to secure steady work at a logging camp in Washington state. But with only one seat on the company bus, he is forced to leave Natty behind with their landlady Connie (Laine Kazan) promising to send for her as soon as possible.

Natty chafes under her landlady’s strict guardianship and it isn’t long before the woman decides that Natty has been abandoned and reports the girl for vagrancy. In a flash, Natty flies the coop and sets out on a cross country trek to find her father out west. It’s a trip with many perils and hard knocks including thieves, unfriendly townspeople, over-zealous cops, train derailments and more. But she’ll soon find allies in the form of young drifter Harry (John Cusack) and an ex-dog fighting wolf she affectionately dubs “Wolf”. Together, they navigate the fractured landscape of a depressed America, holding out hope like so many others before them for a brighter future out west.

Natty Gann is the sort of family entertainment that you just don’t see see anymore, especially from Disney. Working from a wonderfully crafted screenplay by Jeanne Rosenberg, director Jeremy Kagen has fashioned a rip-roaring adventure tale with a beating heart at its centre. There’s some tougher content than you’re likely to find in family pictures nowadays including underground gambling, sexual predators, urban violence and child abuse, but Kagen handles it all with confidence and a maturity worthy of more grown-up fare. There’s real grit thrown up on the screen with nnary any sugar-coating.

Salenger positively shines in the role of Natty who has to face more obstacles in the film’s duration than most adults experience in a lifetime. Her scrappy-yet-affectionate manor is endearing from the very first frame and handily carries the viewer through all the film’s highs and lows. John Cusack provides solid support as the road-wise Henry and Ray Wise positively pulls at your heartstrings as Sol going through the anguish of having to first abandon his daughter and forced to face the fact that she may have died enroute to find him again.

The film is well lensed by Cinematographer Dick Bush with the forests and railroads of BC along with prairies of Alberta providing a stunning backdrop to the well-staged action. The ever-reliable James Horner is also on hand to provide yet another mesmerizing score. You can almost hear an early version of The Land Before Time score in the opening theme.

The Journey of Natty Gann may prove challenging to some viewers more used to non-stop colour, zaniness and “attitude” in their modern family fare. With it’s recent re-issue on blu-ray via the Disney Movie club, I hold out hope that this wonderful film will find the new audience it deserves. Children deserve quality filmmaking just as much as adults and it should certainly be supported when it comes along.