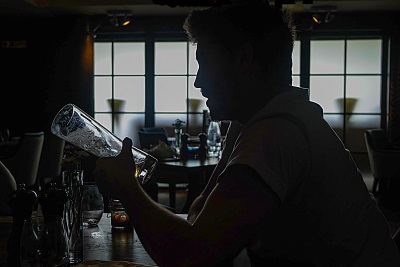 Gee, and I thought the folks at Traveling had a weird sense of humour. But this one is something else.

The Bar takes place, of course, at a bar. A film noir comedy, they call it. Also an entry for the Hot Shot Shorts competition of 2007.

A sad man by the name of Mac (Peter Deluise) is having a bad day and drinking away all his problems. Suddenly, a hot woman named Adeline (Simone Bailly) comes in and requests Mac buy her a drink. As per her request, he gets a rather interesting looking Caesar. The two then go through some cheesy dialogue and Mac manages to pull things repeatedly out of hammerspace. A mug, a thick script, a xylophone, and a tiny doll’s dress.

Adeline suggests inviting him to a party, which causes him to flashback to an awful childhood memory of an actual birthday party that had nearly every single prop he has brought out in the present. Adeline says she has a similar story and presents her story by pulling multiple objects out of her cleavage. Yeah, I can see where this is going.

After Mac tries to decipher her story, Adeline says he was right. The two decide to head out and spend the night together. Right around the end, I started to think I may have seen this movie before. Maybe, maybe not.

There was something very bizarre about this short movie, but the props were a nice touch. It almost felt like a film noir as well until Mac’s story, but despite being only 10 minutes, it was actually worth the time. Really captures some of the vibe in Vancouver.