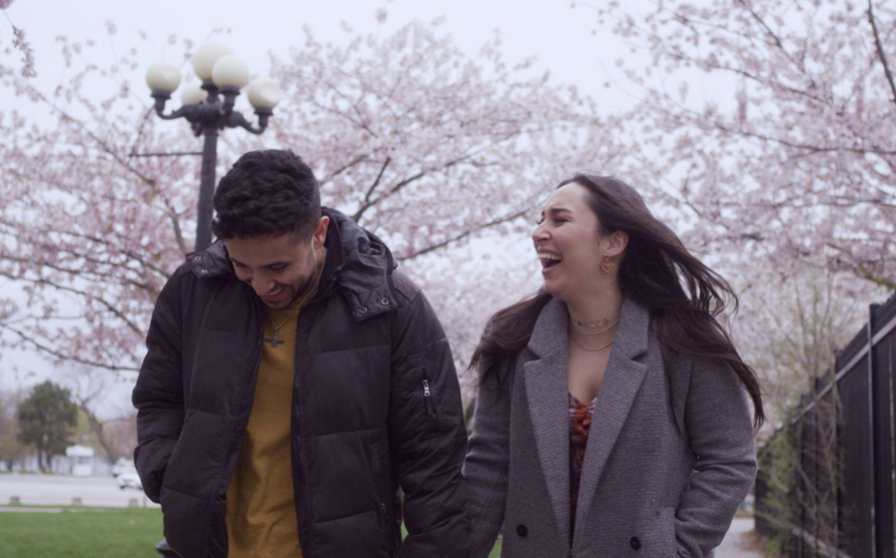 If the Romeo and Juliet scenario seems to have been done to death, it’s only because it is a truly universal story that cuts across cultures to the core of who we are as a human race. But don’t mistake Faran Moradi’s debut feature Tehranto for another hackneyed retread of the Shakespeare classic as this tale of young love in Toronto’s Persian community is a rich recipe of the kind often sorely lacking on the CANCON menu.

Twenty-somethings Badi (Sammy Azero) and Sharon (Mo Zeighami) share a common country of origin in Iran, but little else. Badi’s working class parents fled oppressive post-revolution Iran for a more stable environment while Sharon’s parents left Shah-era Iran for a bohemian existence in Europe before settling in Canada to be close to other expatriate family members (“We’re more Parisian than Persian” Sharon’s mother quips to a border official in the prologue).

The two are thrust together when Sharon’s matchmaking grandma not-so-subtly arranges for them to meet at a family restaurant event. Their mismatched personalities unexpectedly gel, resulting in multiple montage-worthy dates where they find comfort in their common generational pressure to exceed their parents’ expectations for them; Badi as a doctor and Sharon as a real estate agent.

But this wouldn’t be a film-worthy love story if cracks didn’t appear in the form of the couple’s differing ideas surrounding their heritage. Sharon has been encouraged to assimilate into Western society her entire life whereas Badi finds himself yearning to return to his homeland, where there may be growing civil unrest, but where he would at least feel less of an outsider. These cracks are pried open by Sharon’s father Fred (Ali Bashah) openly rejecting Badi at a family dinner and her mother (Mahsa Ghorbankarimi) discovering her wish to be an artist in the Iranian style instead of the more stable real estate career she has been training for. There is a resolution to all this before the end credits, but don’t expect it to be of the Hallmark variety.

Moradi’s debut feature charmed me more than expected, not only by the strong chemistry between its leads, but by the film’s deft ability to use humor to both orient and entertain the audience. Exposition is efficiently delivered by an omnipotent narrator (Navid Negahban) who also pauses the proceedings to educate non-Iranians on certain Farsi phrases and slang (Taarof, Rooni, etc.).

The challenges of multiculturalism on a personal scale are capably mined with questions of to what degree it is practical to assimilate into a new culture while still retaining your roots and not being ashamed of them. It’s a question most immigrants and their children have to struggle with, but tends to come with a special set of challenges for those originating outside of Europe as explored here.

Tehranto punches above its weight as both a romantic tragicomedy and a solid entry in the Canadian cinema canon. Moradi proves he is capable at telling a compelling story that can both speak to a specific ethnic community, but also cross over and find appeal outside of it. I hope to see him and others do so again on bigger budgets and a larger canvas.

Tehranto releases theatrically in Canada by Vortex Media on Nov 25