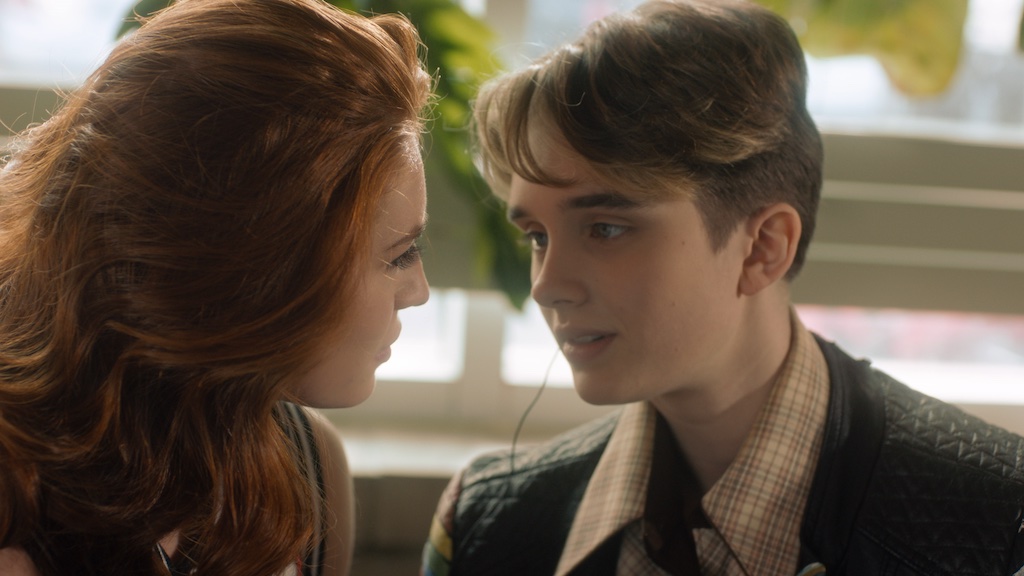 Aside from entertainment value, movies often function as a needed reflection of our own circumstances, showing us clearly what might not seem immediately obvious from our limited point of view. They can put our fears and anxieties into perspective, exhibit how our actions (or inactions) impact those around us, and how what we want most might just be adjacent to what we’re aiming for. Many screen stories have tread this territory before, but not as idiosyncratically and as LGBT-centred as Jude Klassen’s indie musical love story Stupid for You.

As the title suggests, young Kat (Mikhael Klassen-Kay) is positively stupid-in-love with school queen bee Eden (Caylin Turner). When Eden announces her plans to secure the 90’s punk band Polyamorous Diatribe for the class spring fling, Kat sees an opportunity to stand out from the crowd. After all, her mom Dani (director Klassen) was the lead singer before the band broke up.

Kat does indeed grow (superficially) closer to Eden over her celebrity connection, but as the date of the fling draws ever closer, the band’s previously unhealed scars threaten to derail the show before the first chords are played and Kat may miss out on the true love of her best friend Stevie (Mia Rodne) who has intentionally sidelined herself, prioritizing Kat’s short term happiness. Will it all work out? Only the final line of the soundtrack knows for sure.

I usually reserve my criticisms for later in the review, but I’ll unload them right off the bat out of the sense of goodwill the film left me with. There is a slight amateurish quality to some of the acting that takes the audience out of several scenes and some parts of the overall effort come across as underwritten, threatening to disorient the audience and occasionally betraying the film’s indie origins.

Having established that, Stupid for You is otherwise almost pure fun wrapped in a wacky wrapper of musical numbers, comic beats and blink-or-you’ll-miss-them pop culture refs (Anybody else here remember “Pop-Up Video”?). Even though some of the actors are on aforementioned shaky ground, the cast manages to pull together and bring their characters to life. Turner in particular shines as the outwardly confident, yet inwardly crumbling Eden while Rodne steals almost every scene as the long-suffering Stevie selflessly placing her own happiness on the backburner for Kat’s.

A tad light on verisimilitude but plentiful in depth and enthusiasm, Stupid For You manages to enchant and entertain it’s audience via it’s sincere storyline and quirky execution. It’s a relatable ride wherever you fall on the spectrum or however “stupid” you’ve felt for a crush.

Stupid For You recenty screened at the Inside Out film festival and will screen theatrically later this summer.