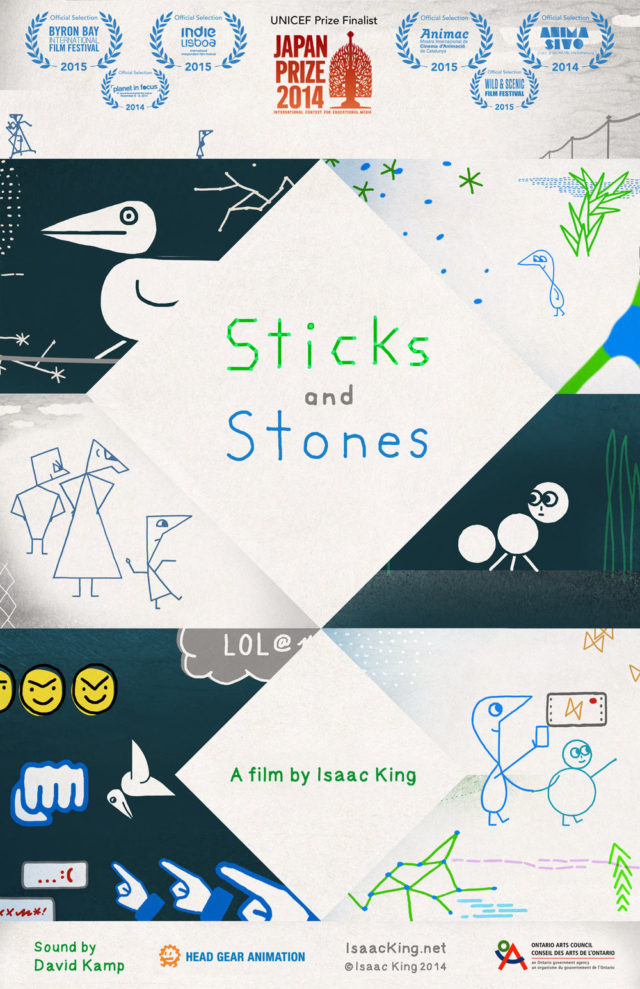 Far away in San Vito Lo Capo, Sicily, Siciliambiente, an annual film festival focusing on environmental issues and social change welcomes documentaries, short films and animation from around the world. As the festival’s 2016 edition is about to start (July 19th to 24th), it’s a great occasion to talk about Isaac King and his animated short Sticks and Stones, winner of the Best Animation prize and spotlight of the Sicilian festival’s 2015 edition.

Toronto-based Isaac King has over 15 years of animation filmmaking to his name, and innumerable awards for both his commercial and independent work. Experimenting in a variety of techniques, including traditional drawing, stop-motion, mixed media, as well as computerized 2D, the Canadian filmmaker has a whole library of colourful tales told in a fun but mindful tone.

Sticks and Stones is a touching and delightful little thought on modern society, social media, bullying, respect for the environment. Minimalist stick figures populate a world where men seem to be essentially cruel towards life forms that surround them, indulging on sharing their harassments online. One stick man sees daylight in the gloomy world of rascals, and shares his positivity on to make the world better. The precious promise of empathy looks onto the bright side of the world.

[pullquote]One can’t help but think of Norman MacLaren, Canadian pioneer of animation film and visual genius, and his combination of fun surrealist imagery with a political and social awareness. [/pullquote]The minimalist lines of his little bird in 1958 film Le Merle (The Blackbird) echo in King’s award-winning short film, as well as the aspirations of peace, sharing, and solidarity contained in his famous stop-motion Neighbours (1952). Fast forward to the world of Facebook and Twitter, here is Isaac King’s film.

While the film can (and should) speak to people of all ages, King’s audience of preference is the young one: in his own statement, King underlines that: “In real life and online, kids are bullied. Innocent animals are also mistreated “for fun”, or by those too young to know better. This film examines how technology and social media affect the way kids interact with each other and the world around them. This film is intended for all audiences, but particularly geared towards children. It can be used as an educational tool, as the themes of peer pressure, online responsibility, “nature deficiency disorder”, and environmentalism are topical and pressing social issues.”

Still collecting awards (Green Image Award at the 2016 Green Image Film Festival in Tokyo), Isaac King’s Sticks and Stones is as valuable as ever, to watch again and learn from again.

The film is available online here.