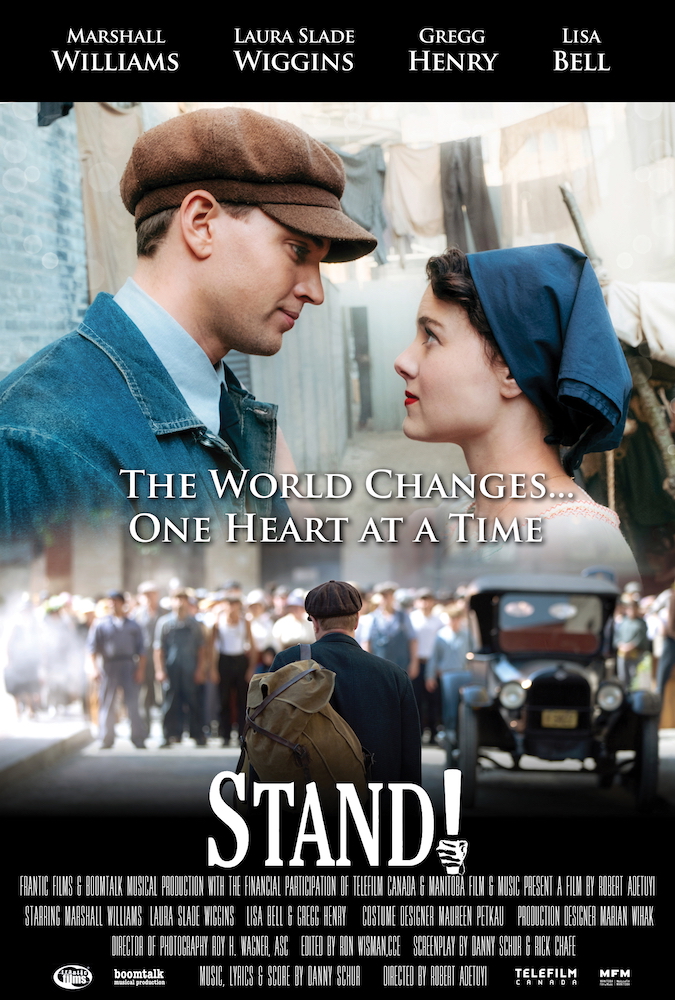 Normally, I don’t take on content like this, but today I decided to take a stand, I felt I had to step ahead, make myself seen, eh- okay. To be honest, Musicals or R&J stories aren’t exactly my shot of Whiskey. But STAND! is one I really got into and enjoyed. Taking place a century ago, we learn about the story of a young man named Stefan Sokolowski (Marshall Williams) and his father Mike (Gregg Henry) who have immigrated to Manitoba to make money for their sick money. The two hardworking Russians also plan to buy train tickets to help with a visit. On their way to the train station, Stefan comes across a local Jewish woman named Rebecca Alamazoff (Laura Slade Wiggins) who he finds interest in, but his father instantly disapproves of. As if that’s not enough, Stefan and his father struggle with not finding durable work in their little town and can only make a very little amount. Eventually, Stefan gets frustrated with his work conditions and so does everyone else as they plan to form a strike. At the same time, they have to put up with the racist WWI soldiers who blame the immigrants for everything wrong happening in the time period. One night after Stefan and Rebecca write an anonymous letter regarding the current state of workers, it gets published in the paper causing problems for AJ Anderson (Paul Essiembre) who was part of the “Knights Of Labour”, that tried to keep work under proper control. Eventually, the letter has more effects and soon almost everyone is walking out, thus beginning the strike. But that’s not the only issue being caused. Thanks to Stefan’s controlling work-obsessed father, he continuously gets in between Rebecca and Stefan’s so-called love life. Also, Rebecca’s brother Moishe (Tristan Carlucci) disapproves of Stefan himself being very jealous. At first Stefan doesn’t see the purpose in striking but eventually decides to join and help the cause. The government on the other hand tries their best to fight against the citizens who demand better work. In the end, it all boils down to who goes where and who does what. Things gets very up and down from there. Mostly down.

I’m going to be honest, for a musical, this had a lot less musical moments than the average musical. Except for when it gets near the end. It’s like one of those films that changes gradually as it progresses. Music is actually pretty catchy, it’s an interesting concept and an interesting plot. I’ve never really seen a story like this, okay I’ve sort of seen this time period (sort of?) but never have I heard of this kind of story reworked into a movie or even a musical. It’s one of the greatest historical stories I have ever seen. Design of set is on par and characters are still enjoyable and fulfilling even when somewhat breaking out in song. As for the ending, I can’t give away too much, but all I can say is that nothing came easy in that time period. Come to think of it, not only does the amount of singing increase, so does the darkness in the plot. It’s a well made film, and while I kind of dislike musicals (not as much as a certain guest writer), I enjoyed this one a lot even if it was a little bit unusual. Most days, Romeo and Juliet type-stories wouldn’t work, especially modern day reboots, given that security cameras are a thing (yonder window? I don’t think so). But this one works because it doesn’t take place in modern times. A great way to teach history and entertain people at the same time. Maybe even show that love conquers all, even when it comes to family issues and conflicting perspectives. Maybe people will also learn that strength comes in numbers, seeing as there’s a transit strike happening in my area and worldwide protests about climate change.

But wait, there’s more! Read Darren’s interview and learn about the happenings on set as well as info about the director Robert Adetuyi.