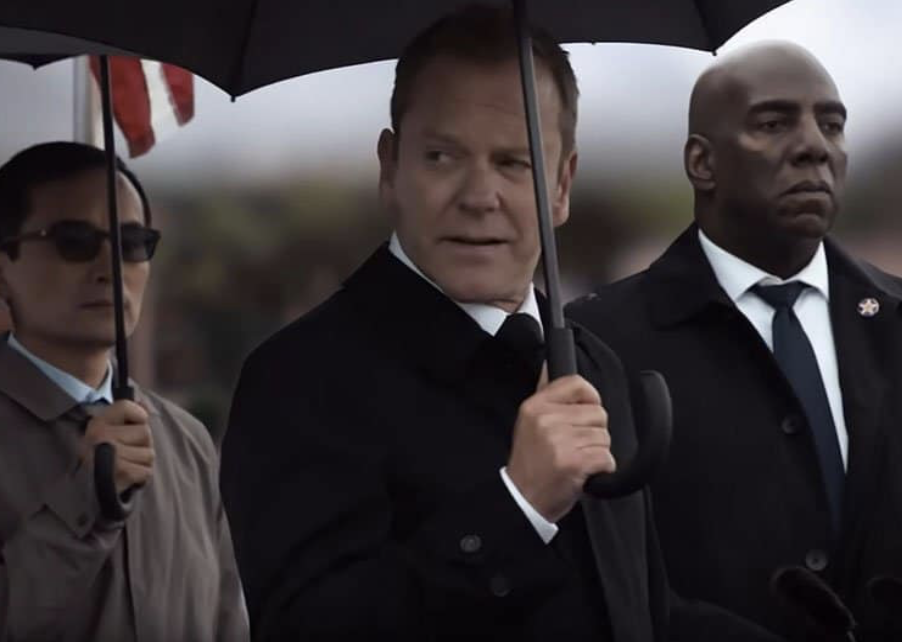 It’s an odd twist of fate that a show like Designated Survivor would ascend alongside the chaotic Donald Trump presidency. Premiering on ABC and CTV in the Fall of 2016, the Toronto-shot series depicted the whirlwind events following a terrorist attack on Washington D.C. An explosion during the State of the Union address annihilates the President, congress and all those in the line of succession save for Housing secretary Thomas Kirkman (Kiefer Sutherland), the eponymous Designated Survivor who suddenly finds himself thrust into the highest office in the free world.

The show’s first two seasons focused on Kirkman attempting to put the country back together  while dedicated FBI agent Hannah Wells (Maggie Q) attempts to track down those responsible for the deadly attack. With the show’s recent relocation to Netflix, the third season finds Kirkman reckoning with this record as he runs for re-election.

Having declined to run on either the Republican or Democratic ticket, the incumbent President promptly positions himself as the Independent choice bent on disrupting two-party system. Leading his campaign is series newcomer Lorraine Zimmer (Julie White) who takes it upon herself to turn the principled Kirkman into a true politician, even if it means playing dirty. Keeping an eye on her is Kirkman’s longtime friend and colleague Emily Rhodes (Italia Ricci) who finds some less-than-ethical activity going on in Kirkman’s campaign office. Also back is NSA Advisor Aaron Shore (Adan Canto) whose new role as Kirkman’s VP and activist girlfriend Isabel (Elena Tovar) force him to confront his previously-neglected Latino roots. Filling the void left by Kirkman’s deceased wife Alex is her deus-ex-machina sister Sasha (Jamie Clayton) whose transgender identity could prove to be a detriment or an asset to the campaign depending on which state you ask.

In the midst of all this campaigning, domestic terrorism bubbles under the surface as FBI-turned-CIA operative Hannah Wells is once again uncovering a conspiracy seemingly undetectable to any federal agency (are they all really this bad at their jobs?).  With the help of paranoid geneticist Dr. Eli Mays (Chukwudi Iwuji), she tracks down an imminent bio-threat that could render catastrophic consequences for American ethnic minorities. I’ll give you one guess as to which party the show has mixed up in this sinister plot.

Leaner and meaner with only 10 binge-able episodes instead of the usual 22, Designated Survivor finds some footing it lost during a rather scattershot second season by choosing a clear story arc and trimming of the cast (While I doubt most will miss the eccentric Lyor or Kirkman’s angsty son Leo, steadfast Secret Service Agent Mike was an unfortunate omission). Sutherland once again shows why he’s the man for the job as he continues to anchor the show with a winning mix of grit and compassion that is too often lacking from real-life counterparts. The premise of a man in way over his head just trying to do the right thing with the enormous responsibility thrust upon him is still a compelling one. Even when the shows myriad of subplots (some more eye-rolling than others) threaten to derail things, we can have confidence that Sutherland will keep things right on track.

As for the rest of the cast, White is a smart addition as she handily portrays the perfect snake in the grass who could either prove Kirkman’s salvation or downfall. Ricci and Canto are both given juicy plots to chew of which they navigate admirably. While Kal Penn’s hapless Press Secretary Seth Wright remains a highlight during his often contentious press conference scenes, he’s mostly relegated to an earpiece for other character’s plotlines this time, with his new sperm donor family failing to gain much interest from this viewer. Maggie Q continues to make the best of her rather unwritten role as Agent Wells. It’s notable that her storyline feels almost completely disconnected from the campaign A-plot. Her mission truly feels like a completely different show until the storylines finally converge in the last third of the season.

It’s a political show, so politics are unavoidable, especially in a season set during an election. And while the script certainly likes to pontificate that Kirkman is an Independent “centrist”, the show’s leanings are anything but. With the Democratic opponent reduced to less than a footnote, Kirkman clearly and consistency leans left on almost every issue. From Immigration to Transgender rights to taking on Big Pharma, theres nothing a little progressive posturing or government overreach can’t fix. While this may certainly preach to the choir Netflix is playing to, it certainly won’t win many fans from across the aisle or even in the aisle for that matter.

Now free from network content restraints, the show is free to indulge more explicit content this time which is mostly filled by an ostensible f-bomb quota imposed on each episode. It also dips it’s toe into the documentary genre with several episodes utilizing real-world interviews to drive certain points home. While it doesn’t mix that well with the show’s manufactured aesthetic, it’s an interesting experiment that is thankfully used sparingly. It may have proved even stronger if they’d allowed more diversity of thought to be included in them.

I had  completely forgotten that a new season of Designated Survivor had dropped in June given that Netflix seemingly did almost no promotion for it. Now that I’ve seen it a month later, I’m certainly glad to see Kiefer back on his game and to have my unusual craving for political theatre satisfied despite my disdain for the real thing. It’s just unfortunate that the show didn’t bother to take some real risks beyond adding some naughty words. Any show can play it safe. It’s the ones who seriously challenge the popular narrative that are remembered.