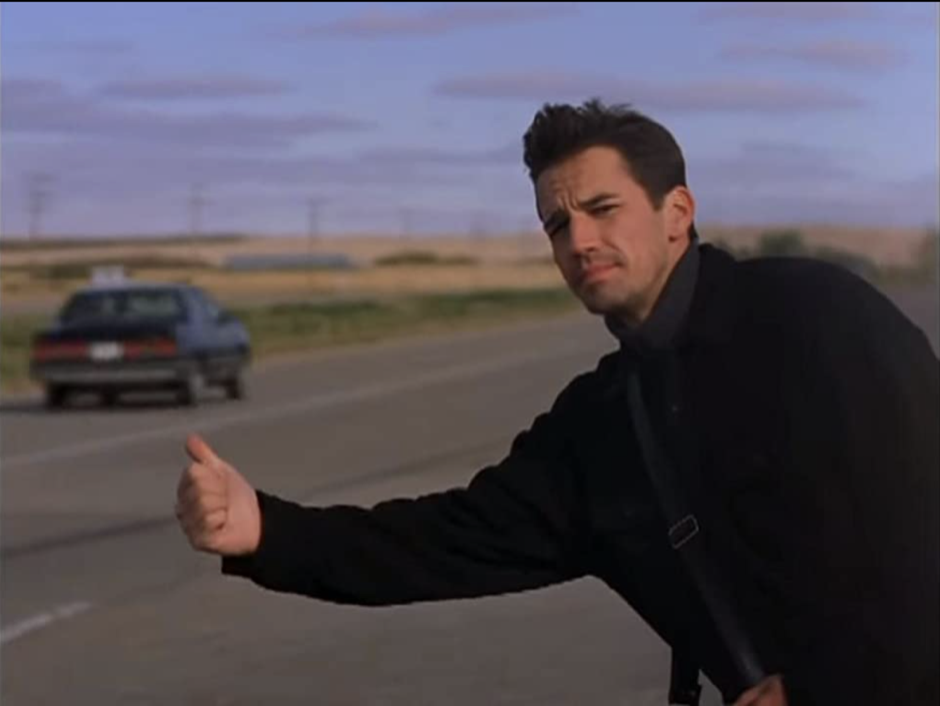 “God’s tried me a thousand ways…”

There is a subset of filmmakers that garner very little attention, even in cult-film circles. They have vague origins, even vaguer sources of funding and possess only a rough inkling of what a feature film is; 90-120 minutes of images with sound, bookended by credits and all that. They have even less of a grasp on basic human interactions and motivations. You may have seen the work of this elite group of producers in such films as The Room, Birdemic and whatever Satan-spawn congealed to bring Sharknado into existence. Lest I continue on an American-themed sojourn as I did last week, I will waste no further time in presenting Canada’s official entry into this exclusive canon, Ryan’s Babe.

The world’s oldest college student, Ryan (Bill LeVasseur) has been having a bad week. After spurning the advances of unbalanced childhood friend Connie (Alix Hayden), he has been forced to flee his Saskatoon home after she stages a fake suicide attempt that triggers her even more psychotic pappy Bill (Peter Cooy) into a homicidal rage. Given that attempted murder apparently isn’t a crime in this version of Saskatchewan, it’s best for all involved if Ryans stays out of sight until Bill either cools down or loses his shotgun.

Ryan’s impromptu road trip is rudely interrupted by a gun-wielding Sally (Catherine Rossini) who’s looking for a ride first and a shoulder to cry on second. I’d go into more detail on her plight, but like a mother with high standards, the movie swiftly decides that Sally isn’t good enough for Ryan and before you can say “deus ex machina” her storyline is wrapped up and the script promptly puts her on the first Westjet flight out of the show.

“Who is this Shacks-sphere? Where the hell is he from? Jersey? New York? Toronto”?

Ryan’s Babe seems to have been made by aliens who saw a few movies via satellite and decided to try their hand at filmmaking while doing some recon for the upcoming invasion (budget cuts keep pushing it back). They got the basic idea of what a film is supposed to be, but have a lot of trouble with the mechanics. There’s no real plot other than Ryan escaping a toxic crush for a series of bizarre events, only to decide for no earthly reason to return home to her lovingly psychotic embrace. The film is oddly-staged and shockingly clumsily edited at times, although you may be too busy blocking your ears from the same three pieces of synthesizer score to notice. Did I mention the entire film was dubbed in post? This is the movie that Godzilla and Kung Fu Theatre make fun of in the locker room.

LeVasseur certainly looks the part of a leading man and honestly just seems happy to be in a starring role after years of playing such prestigious parts as “Newlywed Husband” or “Hot-Tub Guest” in whatever shows they were making in the 90s. He seems to have no qualms about the film as evidenced by the bonus interview on the DVD and given the current state of his career (never mind the rest of the cast who clearly didn’t quit their day jobs), who can blame him?

“Just imagine: you, me and 50 screaming chicks!”

Given what I’ve revealed already, it’s not much of a spoiler to note that the film ends with Ryan in the middle of yet another mess. But fear not for him dear audience, for with his kind of luck, he’s probably since become a millionaire, been elected President, and probably saved the Universe from Thanos when the Avengers weren’t looking, no matter how much consequence-free hell he had to go through to get there. So here’s to Ryan, but definitely NOT to his “babe”.

Heres the rating. Interpret it how you will:

Ryan’s Babe was apparently saved from the garbage by Tyler Baptist who then released it on DVD in 2015. You can purchase it from Amazon, or if you’re in the Vancouver area, visit the fine folks at Video Cat on Cambie street for this and other bizarre (or normal) titles.