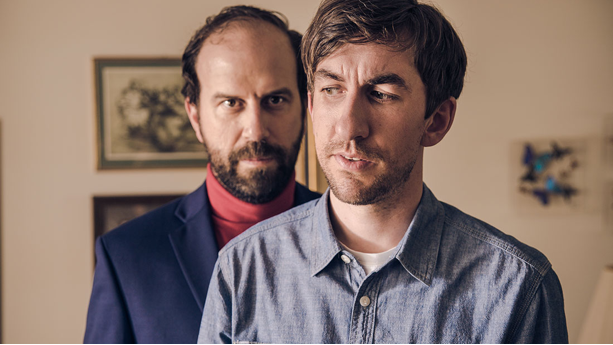 Its a rare person who doesn’t dream of winning millions in the lottery jackpot and making all their wildest dreams come true. But what happens if you fail to invest wisely and the money runs out? Just ask the protagonist of Room for Rent.

Mitch Baldwin (Mark Little) found himself at the top of the heap upon winning the state lottery. But 3.5 million dollars later, the now thirty-something is broke and the town laughing stock. He lives with his parents with only a trail of failed inventions and pointless purchases to show for his former wealth. When his father (Matt McKinney) is forced into early retirement, it seems that the house will have to be sold, potentially leaving the unemployed Mitch homeless. The sudden arrival of a new boarder, Carl (Brett Gelman) preserves the status quo, but also begins to unravel our hero’s world.

Carl is witty, smooth talking, and quickly wins over the household, helping out with chores and even helping find Mitch a job. It soon becomes clear however, that the house guest has more sinister aims as he gradually turns Mitch’s life upside down by turning his parents against him, running him afoul of the law and even threatening his life. Mitch must now turn to his former girlfriend Lindsey (Carla Galio) and bully-turned-cop Huey (Patrick J. Adams) to get the goods on Carl and send the menace packing.

This isn’t exactly a light-hearted outing, often balancing mirthful playfulness with sobering darkness. Mitch is a broken shell of a man, haunted by the rather embarrassing failure of squandering millions of dollars affecting not only his life, but those around him. He’s a rather pathetic figure who receives an adequate portrayal from Mark Little, but perhaps could have benefitted from further fleshing out from the script. His lack of thrift is played for laughs, but it’s rather hard to believe that even this doofus could go completely broke post-lottery win.

Brett Gelman is a supremely effective foil for Mitch as Carl. He straddles the line between charm and menace perfectly, even when the film itself doesn’t. Patrick J. Adams lands some of the biggest laughs in the film as the power-tripping Huey who seems to be dealing with some demons of his own. I felt Carla Galio was miscast as ex-girlfriend Lindsey. She’s visibly too old for the role and gives a mostly one-note performance with the dial stuck on animosity.

The film has a lot on it’s mind about personal responsibility and how it affects everyone in our lives. Most of this stays frustratingly below the surface until the very end and while it all starts and wraps up nicely, the road to get there feels awfully empty even while peppered with laughs. The lessons learned feel rushed and don’t develop as naturally as they should from the narrative.

Room for Rent gets by well enough on several standout performances and laugh-out loud moments, buts it’s just not enough to justify a second viewing. I suggest spending your lottery winnings elsewhere.