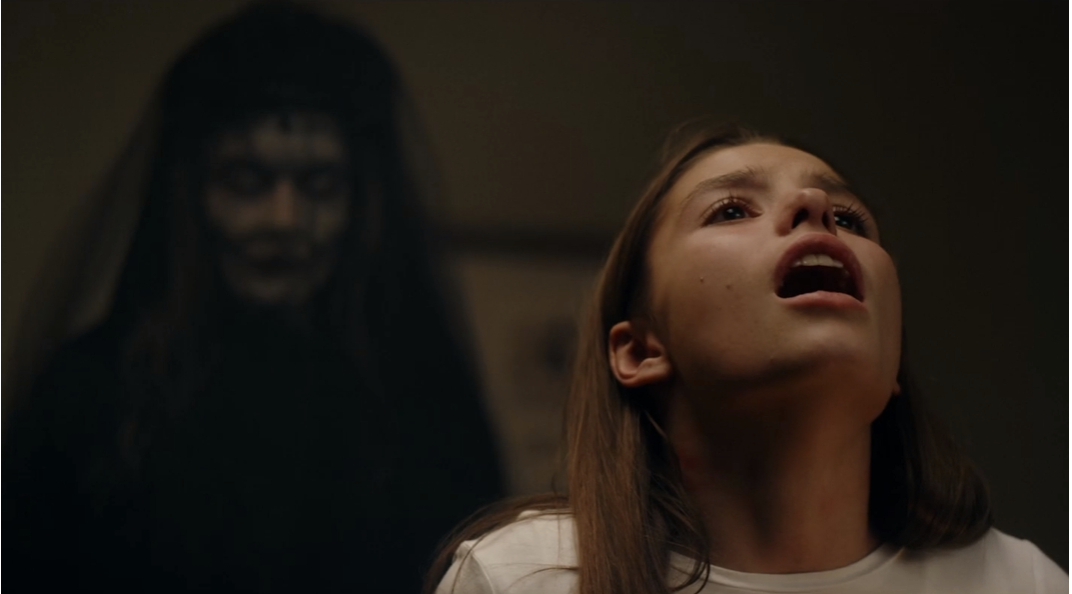 The Queen of Spades is considered to be the black sheep of the card deck in some games. Such superstition amounts to very little in the real world, but characters within a horror movie are advised to keep such cards close to the chest, especially where an urban myth is concerned But if they listened to that advice, we wouldn’t have such feature-length supernatural chillers like this week’s movie, Queen of Spades.

Not to be confused with the 1949 and 2016 thrillers of the same name (but completely different plots), veteran short filmmaker Patrick White’s debut feature concerns the latest group of kids dumb enough to enact an age-old curse for kicks. Eager to gain YouTube fame (what, no TikTok?), pre-teen Anna (Ava Preston) and friends decide to investigate the eponymous urban myth. Perform the correct ritual in front of a mirror and the spirit of a 19th century Russian aristocrat will grant you one wish, provided she’s in a good mood. To their dismay and our benefit, the Queen has been awoken on the wrong side of the demonic bed and wastes little time in dispatching the cast members via a variety of mirror-based mayhem.

Of course, it takes a Russian to beat a Russian and last-girl-standing Anna and her harried single-mom Mary (Kaelen Ohm) track down one of the ghost-busting variety in reclusive alcoholic author Smirnov (Daniel Kash) who has literally written the book on the subject. After refusing the call the contractually-required several times, he acquiesces for the sake of the final act which will take our characters into as much Excorcist-themed territory as the limited CANCON budget will allow.

If I sound unimpressed in the above summary, it may be due to my being outside the target audience which is probably 12-15 year-olds who have never seen any horror movie ever. The archetypes are quickly established and none are particularly compelling, especially protag Anna who seems to spend almost the entire runtime on angsty-autopilot until a demonic possession or two is called for. Adult cast-members Ohm and Kash do the best they can in their limiting roles with Ohm in particular managing to gain a slice of audience empathy although like daughter, like mother, she too seems like she’d rather be elsewhere.

The film is nothing if not technically competent with solid cinematography (play a drinking game with the drone shots!) and decent makeup effects that handily straddle the line between reality and the fantastic. It loses points early on in the VFX department however with a compositing job that belongs on a 70s variety show.

What we’re left with is a technically competent, but artistically lacking programmer that will keep the tweens busy for an evening. As for the rest of us, I suppose you could draw worse cards than Queen of Spades, but given the superior genre choices out there, you might be better off just not playing in the first place.