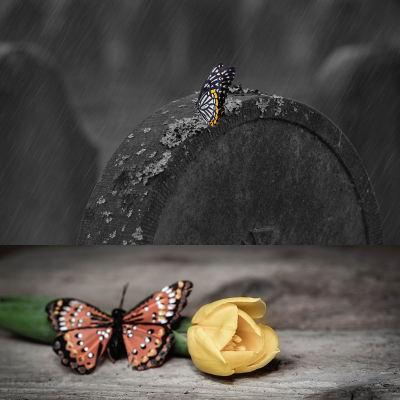 After that weird wonderful movie I never would’ve expected to see over the weekend, I decided to go for something shorter and simpler. I watched a short film called Pretty Thing, a drama/romance.

The movie starts with a sick old woman named Aribel possibly on her death bed. She keeps on coughing until she coughs up a butterfly. Meanwhile her former lover, Lewis, discovers the same butterfly now dead in a jar, as he recalls the past when he first met her in a field. As a young man, he discovers Aribel in a grassy field on a swing set. Together the two start to bond and share passion together as a butterfly gently rests within her hair.

The rest of the flashback shows them passionately in love even though they don’t express much. At one point, the girl’s back acts like a projection screen to show all the memories that are playing through Lewis’ mind. Somehow, the more he wants her, the less she wants him. Some time later on, in the winter, things start to get dark and depressing and we see what happens in just a few words and some amazing gestures.

The film was very artistic with the use of the butterflies showing what happens when you try to contain something, only for it to fade away. The lighting and the setup in every shot was amazingly stunning and powerful. Even though it didn’t have any dialogue other than narration, it got the message through very clearly, especially for something with very little story. It was also nice to see something with drama and romance.