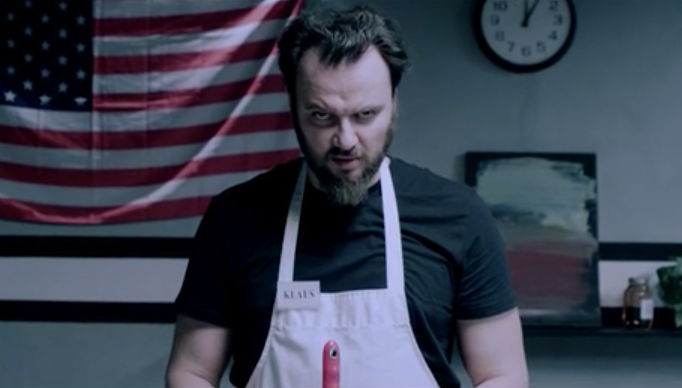 Do you ever hear a voice in your head that tells you how to do things? Does it fuel you with vile hatred? Welcome to the life of Klaus (Raresh DiMofte), who may seem like a simple quiet man living his life, but his own haunting nightmares and the voice in his head make it hard to get through anything. Klaus is already pretty suspicious about what his wife is doing while he’s gone and to make matters worse, his co-worker Kelsey (Kristin Shale) is annoying him a little bit too much. And once he’s pushed to the limits, it’s only then that things get out of hand for Klaus. And even worse for those around him.

This short film gives viewers chills as it progresses. It’s a very freaky story with creepy and disturbing moments throughout. Raresh DiMofte gives off quite a performance as a very intimidating character. It’s like he can naturally form into this role and become deadly unexpectedly. Knowing him personally, I never thought I’d be freaked out by him. Throughout the movie, the colours are dark and ominous with minimal sound, except for the two moments featuring a TV show that parodies the classic tv shows featuring a live host who reminds us of those friendly faces we grew up with mixed with a cartoon background similar to shows of today. But even those turn dark-mannered despite the bright upbeat atmosphere within them. I will admit modern day kids shows give me the creeps more than the uprising of technology. The rest of the movie is edgy music and the ever present feeling of hatred and regret mixed into a freaky blend, and when one sees it, they can certainly feel a sense of uncanny fear. Frightening but definitely worth a watch.

One thought on “POLYMORPHIA (Review)”