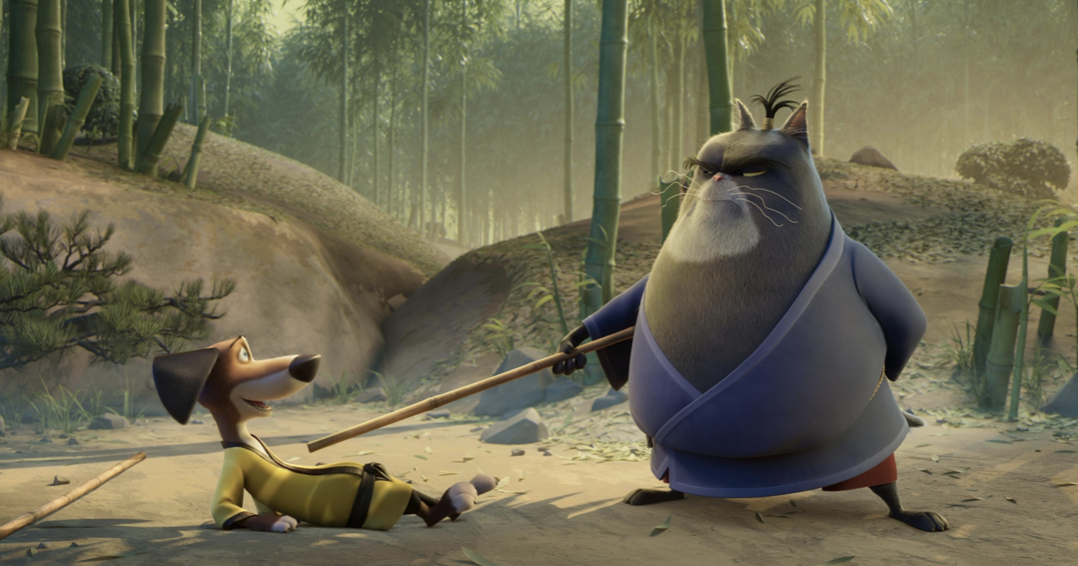 There’s a general sentiment in popular culture that says the 1974 Mel Brooks classic Blazing Saddles could never be remade today. Whether one cites political correctness, modern aversion to westerns or the tongue-in-cheek fact that almost the entire cast is now deceased, a reimagining of the tale of Black Bart and the Waco Kid long seemed impossible. So I certainly wasn’t expecting one in animated form when I went to check out Paws of Fury: The Legend of Hank.

The film opens with far too many studio logos followed by a credit lampooning this very thing (“In association with a bunch of other guys too numerous to mention”), immediately informing the audience of the level of fourth-wall busting to expect. We are introduced to this world where “only cats [are] living” via a playlist-worthy opening track sung by Michael K. Lee. Warmongering Ika Chu (a deliciously wicked Ricky Gervais) has grand plans to expand his even grander palace, but the humble village of Kakamucho stands in the way of development.

His schemes to wipe the troublesome town off the map seem inevitable when his hired bandits successfully chase away the town’s resident samurai, but when his boss the Shogun (Mel Brooks, giving his blessing to the remake) orders him to appoint a replacement samurai, Ika Chu hires the lowliest candidate available, Hank (Canada’s own Michael Cera), a distant traveller only moments from being executed for the country’s worst crime: being a canine in cat land.

His new position is challenged not only for being a dog, but also by his complete lack of genuine samurai skills! Luckily the script has placed disgraced samurai master Jimbo (Samuel L. Jackson) in his orbit and a couple Hero’s Journey beats later has him attempting to mould the hapless Hank into at least an imitation of a samurai. Fighting against a mighty warlord, a town’s prejudice and his own master’s scepticism might be enough for most to throw in the towel, but even this desperate dog is only one wacky final act from having his day.

By now it’s become crystal clear that the above film should have made its debut under the obvious and snappier title, “Blazing Samurai”. The aforementioned opening title song and a visual gag recognize this, but the title was switched to the above, possibly to cash in on pop culture’s seeming preference for kung fu over samurai fare.

Title qualms aside, the film itself managed to elicit some hearty belly laughs from me. It takes enough beats from Blazing Saddles for the original screenwriters to be credited, but packs in enough of its own comic punches to stand on its own (a gag involving a game of “telephone” is particularly rewarding).

The animation from Montreal’s Cinesite is cartoonishly pleasing with the main cast, if a bit lax with the supporting players. Gervais has the time of his life with Ika Chu, inflating the arch villain with his custom British acid tongue. Cera manages to extend his trademark hapless youth character despite being well into his 30s and Sam L Jackson at least manages to train this warrior better than he did Anakin Skywalker.

Paws of Fury ends up landing as Kung Fu Panda-lite for the kids and an affectionate nod to Blazing Saddles for the adults. For what it lacks in depth and staying power, it makes up for in a relentless sense of fun and willingness to please. For turbulent times such as these, that’s more than enough reason for a satisfying night at the movies.

Paws of Fury: The Legend of Hank is currently screening in theatres across Canada