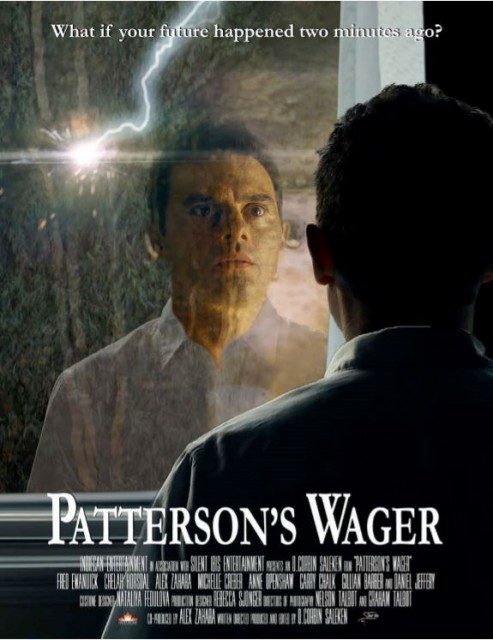 In this large confusing world, it’s hard to tell what’s real and what’s not. And Patterson’s Wager shows a rare case of some supernatural things being most likely true. When Charles (Fred Ewanuick) is trying to practice proposing marriage, he randomly witnesses rain playing in his mind followed by a falling branch. In just a few minutes, the exact same thing happens for real outside his house. But his girlfriend Audrey (Chelah Horsdal) doesn’t completely understand when he explains it to her and soon Charles starts getting concerned about when the next vision is going to happen. When it does, it either works or he prevents it from happening, and Audrey recommends he should embrace it. In a side story, a young girl named Otter (Michelle Creber) is taken on a camping trip by her father (Alex Zahara) and her grandpa (Garry Chalk) as they introduce her to a family tradition of making large tracks in the forest and believing in the mythical creature Bigfoot.

While most scenes were predictable and basically genuine, I found this film to have some interesting moments. I could actually understand the characters better in this movie than most movies that have covered this concept. The cinematography was simple and impressive, and the story was actually well written. It’s interesting how a story about Bigfoot can somehow coincide with a story about being able to see ahead into the future. No Bigfoot movies I have seen managed to do that so well. The movie also shows it takes a lot more to see than to believe. And that’s what makes this movie enjoyable to watch. Who knows? Maybe Bigfoot is somewhere out there. I thought I caught him once, but it was just some dude in Lynn Canyon with a bad case of severe body hair.