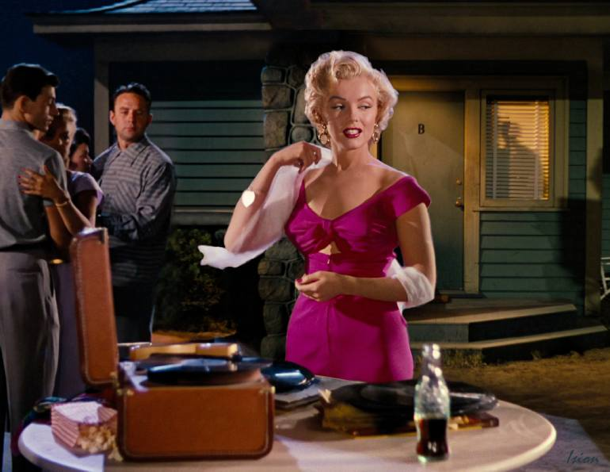 The beautiful Niagara Falls that straddle the border between New York State and the Province of Ontario have long been a famed tourist destination and backdrop for such screen-based fare including Superman II, Bruce Almighty, and the short-lived cult TV dramedy, Wonderfalls. Preceding all of these was a unique entry in the filmography of one Marilyn Monroe, whose powerful screen presence gave even the mighty falls a run for their money in 1953’s Niagara.

Polly Cutler (Jean Peters) has just arrived on the Canadian side of the falls with husband Ray (Max Showalter) for a much-delayed honeymoon. Things get off to a rocky start as they find their cabin still occupied by the previous tenants; George (Joseph Cotten) and the drop-dead gorgeous Rose Loomis (Monroe). Rose insists that her husband is unwell after being discharged from an army hospital and the Cutlers decide to take another cabin.

Despite the intoxicating sights and sounds both above and below the Falls, Polly continually finds herself drawn into the orbit of George and Rose’s marital struggle as her own husband is continually distracted by work matters that have intruded on the trip. Before long, it becomes clear that Rose is having a steamy affair with a younger man (Richard Allen) and that deadly consequences are in store if George finds out. But in this story, the dominoes may not fall exactly where you expect.

Niagara is notable for being one of the few entries in Hollywood’s legendary Film Noir genre to be lensed in colour. In fact, it was also one of the final films to be shot in the luscious Three-Strip Technicolor format. The colours truly leap off the screen here from the opening rainbow cast by the cascading falls to Marilyn’s knockout pink dress during a summer night party. This merely adds to an already magnificently shot film which takes full advantage of it’s setting with thrilling location shots aplenty and keeping studio rear-projection to a minimum.

It’s a shame that such well-rendered setting should have to house such a lacklustre story. The film is structured in such a way that forces our apparent protagonist, Polly into little more than an audience proxy who ultimately has little impact on the story and only seems to participate in the proceedings through sheer contrivance. This leaves less development for the remaining characters and as such, it’s hard not to feel cheated from what could have been an intriguing love triangle and the events and motivations leading to it.

Despite it’s structural shortcomings, the film’s performers give this under-written script 100 percent. Cotten glowers through the shadows as a man broken by war and a wife he can never satisfy. Peters does the best she can with her luckless protagonist role and Showalter provides some levity as her clueless husband. But of course, it’s Marilyn herself who steals every scene she’s in playing against-type as the film’s femme fatale. This was the first film in which she received top billing (Ladies of the Chorus reissue notwithstanding) and it’s easy to see why. With her signature “look” of glistening red lips, arched eyebrows and beauty mark now in place, the camera is in love with her every move whether she’s seducing young men on the campground or fearing for her life as she attempts to flee town.

The film presents a rare look at then-contemporary Canada. With the Horseshoe Falls belonging safely to the Dominion, the film is naturally set on the Canadian side which features both the Falls themselves and the border-straddling Rainbow Tower, which a tour guide quips plays “God Save the King” (our then de-facto national anthem) much better than the “Star-Spangled Banner”. There are no Mounties to be seen as policing duties are split between City of Niagara Falls PD and the Ontario Provincial Police. But naturally being a Hollywood picture, it’s the US River Patrol and Coast Guard who ultimately save the day.

For all it’s failings in the storytelling department, Niagara is more than worth a look for it’s stunning visuals and even more stunning star who more than makes a case here for why she went on to become a legend of the silver screen.