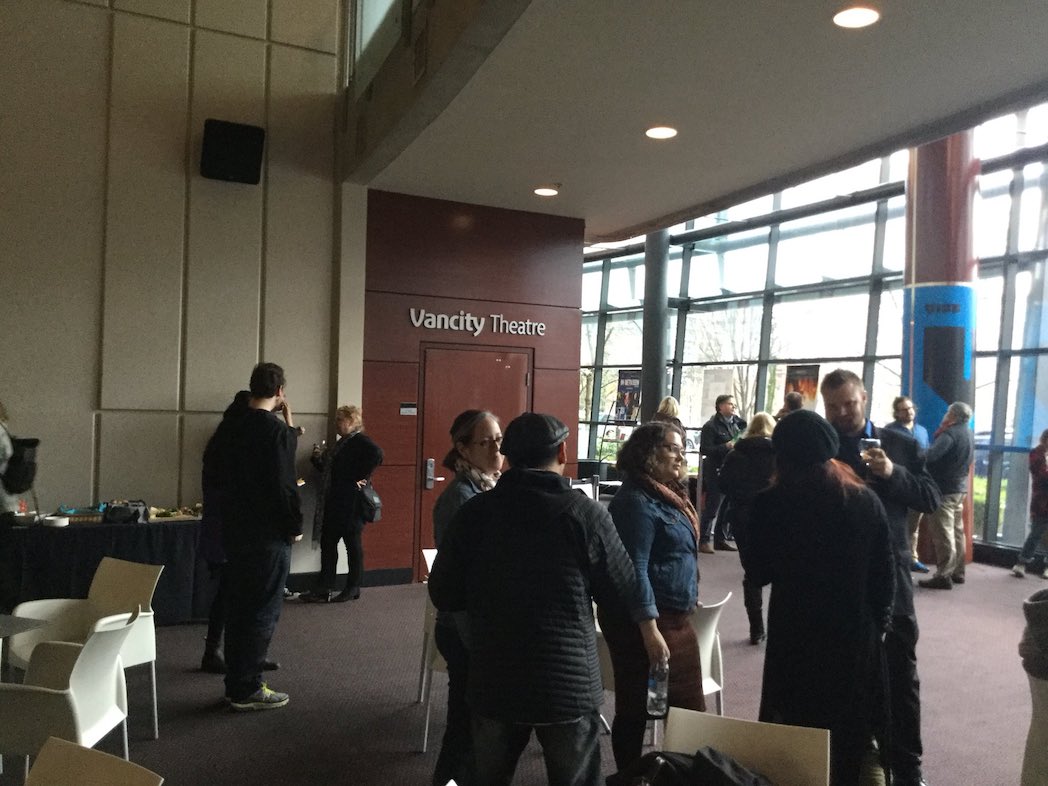 Over the weekend, DGC BC hosted an event that was kind of different than what they usually did, a pitch session which would then present awards. 3 different filmmakers each got selected to pitch their ideas in two different categories: The Emerging Filmmaker Award, and The Legacy Filmmaker Award. Each winner of the pitch sessions would win $30,000 to help make their short film a reality. And of course, the pitch sessions had 3 jurors, who asked very interesting questions. There was Ed Brando, who managed William F. White International, Walter Daroshin who was in charge of the Leo Awards, and Kalyn Miles, who was a local actress. But before we could get into those exciting pitch sessions, first came a screening of the short film, Victory Square by Jacquie Gould. Everyone in the industry knows Jacquie Gould and speaks highly of her. I actually happened to meet her in a lineup for ice cream last year. Gould’s short film focuses on one of several locations where if you bring a camera, you run the risk of getting assaulted for it. The Victory Square Memorial Park, where the homeless hang out and the druggies deal dope. Several down-and-out residents along with two undercover police officers are the focus of our story. Elizabeth (Camille Sullivan) is a cop who recently transferred to this new location while Officer Zeph (Terry Chen) shows her the ropes. Right when they come across a man who is her ex-husband, a homeless man named Louie (David Cubitt), the two officers find themselves preventing a girl named Sugar (Maddie Philips) from committing suicide. This film was breath-taking and extremely relatable as well. It almost seemed like they actually shot it around that area with ease. The residents looked so much like the usual residents I had no idea there was a costume department for them. It really captured the vibe of that one park and of course it showed why I don’t go there often unless I’m invited/part of a film shoot out there.

Now, on to the pitches. As mentioned before, the first 3 pitches were done by emerging filmmakers, who were on the road to successful careers The first pitch was by Gabriel Correa, and his pitch for “Beautiful Gun”. “Beautiful Gun” tells the story of a young boy living in a tough time of his life when he discovers certain feelings of homosexuality during the Christmas season, and of course, working with father in a weapon shop. Moving on, the next pitch was “The Last Resident of Africville” as pitched by Thomas Ma. A short film that was based on a true story of that one small landscape in Halifax called Africville, where black people lived making their own micro-community until it got destroyed by developers. I feel like this one should definitely be made, but I wasn’t a judge so I couldn’t have my say. And the final pitch for the Emerging Filmmakers was Jacqueline Nguyen with her idea, “Molly’s Tale”. This sounded like a funny story about a lady with the most strangest birth defect ever, a human tail. She’s classified as a freak and wishes she didn’t have this mutilation, but she doesn’t realize how handy it is. Based off the fact that fetuses actually have tails for 8 weeks of development. Oh my.

A quick restroom break was made, and we moved on to the next segment, Legacy Filmmakers. These were people who have actually worked for quite a long time in DGC BC making many great films. Our first pitch was done by Alysse Leite-Rogers and her concept, “The Finger”. This tells the story of two 10-year old boys who while one day exploring, find a severed finger in a lake. One of them decides to get in touch with the authorities. The next pitch was “We Came From The Sea” by Jeremy Lutter, which is a short film that focuses on recovery of drug ordeals in rehab, told in a very artistic format. And the final pitch of the Legacy Filmmakers was Holly Redford and her concept, “Normie”. It’s a short film that explains the lifestyle of individuals living in a shelter/hostel. And that was all of the pitches.

After this came a long 30-45 minute mingle session between the many different people who attended/were invited. Complete with cheese, crackers, veggie things, and some wine. Okay, the wine was free, but the other alcohol, not quite. Finally, after a good long discussion, the 3 jurors, came to their decisions and had moderator Allan Harmon announce the winners, much to his own anxiety. Gabriel Correa of “Beautiful Gun” and Jeremy Lutter of “We Came From The Sea” were the winners, each getting $30 grand to make their films. But Harmon himself stated that the other filmmakers should go out and crowdfund their ideas and get help from industry friends because all the pitches were fantastic. I hope to see all of these amazing ideas become short films in the future. Maybe some of them might even become full length features. Who knows? We’ll just have to wait and see…