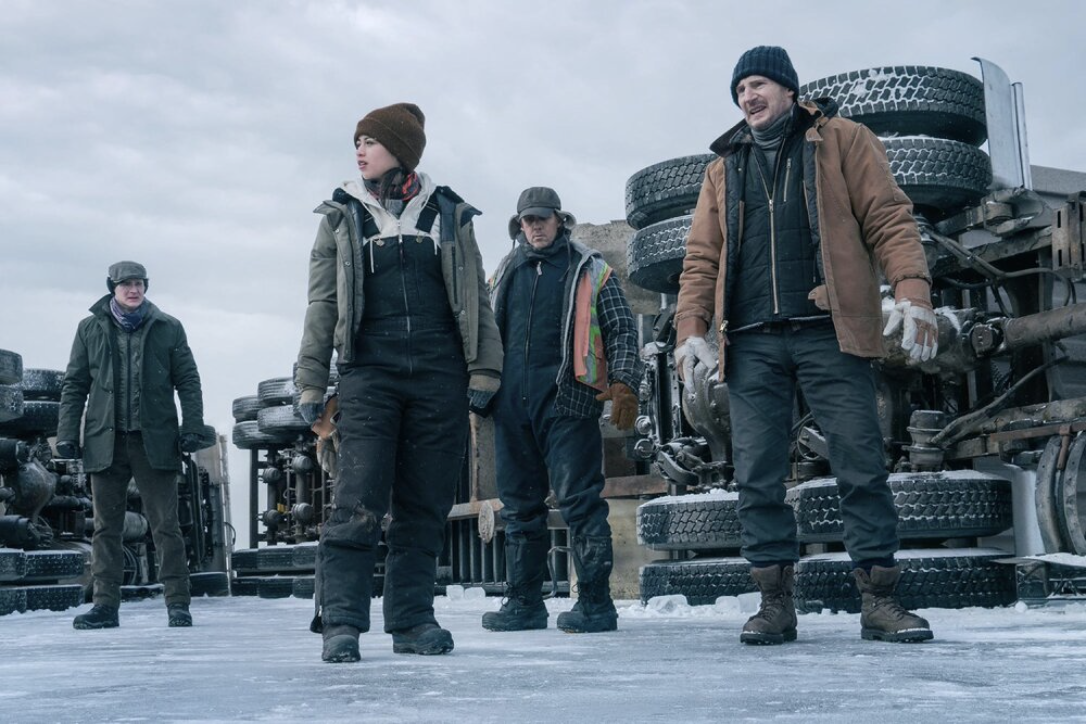 My dad once (or several times) told me that he first learned to drive on a frozen lake somewhere north of the 60th parallel. While this is apparently a none-too-unusual occurrence in that region of the globe, I doubt he found his ice-bound drives as challenging as Liam Neeson’s outing in The Ice Road.

Neeson’s particular set of skills this time around see him as a skilled long-haul truck driver who finds himself taking on a particular dangerous and time-sensitive mission of delivering drilling equipment from Winnipeg to trapped miners in Northern Manitoba (yes Virginia, Canada can exist in movies) within 30 hours before their oxygen runs out.

Taking no chances on a trek that will take them over ample kilometres of spring-thawing ice, Neeson and his mechanic brother Gurty (Marcus Thomas) are joined by fellow trucking veteran Jim (Laurence Fishburne), Cree activist Tantoo (Amber Midthunder) and company pencil-pusher Tom (Benjamin Walker) in a three truck convoy for maximum technical redundancy: only one rig need survive for the mission to be completed.

But this is no ordinary episode of Ice Road Truckers as a flurry of bad weather, mechanical malfunctions and a saboteur in the midst all conspire to derail the mission with a vengeance, all while the miners slowly suffocate during the subplot and start contemplating drastic action. It’s almost as if someone wants them to fail. But then again, doesn’t every action movie need a villain?

Given the themes of worker safety vs. corporate profits, combat-induced PTSD and Indigenous land rights introduced in the film’s opening act, this might have just as well made a decent road movie with raised stakes. But given the increasingly ludicrous demands on the action genre (thanks Fast & Furious), we’re left with little more than a series of increasingly incredulous circumstances that might just convince you that God himself must hate truckers! Only occasionally is this punctuated by whatever surface drama the script can muster. I’d be lying if I said it wasn’t a fun ride with solid stunt work (If stunts doesn’t get an Oscar category next year, I’m boycotting), but I’ll be left with little more than the frozen far north setting to help me distinguish this from other action vehicles.

Neeson is in usual fine form as his standard stock character he’s played for the last decade and Midhunter adds some decent character beats, even if they’re not particularly deep ones. Not much time for that between action set pieces which are pretty well-staged for what they’re worth. Neeson has visibly slowed down with advancing age and trading hand-to-hand-combat for comparatively easier driving (shout-out to the stunt drivers) was probably a decent career move.

The Ice Road doesn’t break any barriers or challenge any craniums, but fits well enough within Liam Neeson’s “Man with Special Skills” sub-genre. It’s an expensive vehicle to achieve mildly-entertaining mediocrity, but at least the good taxpayers of Manitoba will get to see their own province depicted on screen for a change.

The Ice Road can now be streamed on Netflix Canada