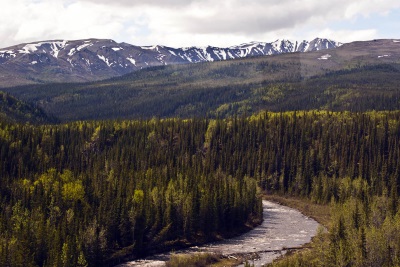 Over the weekend, I had a chance to watch the newly released Mountain Men, a dramedy about two brothers struggling to survive the wilderness.

Our film starts out simple. Toph (Tyler Labine) is relaxing in his truck at the hospital parking lot waiting for his girlfriend Leah (Britt Irvin) while dealing with his pesky drug customer, Herschberger (Ben Cotton). Toph’s career(s) consist of selling pot, and being a DJ. Leah finally comes back and gives Toph the news: she’s pregnant. Now both of them are unsure of what to do, raise the kid or abort it.

Toph’s brother Cooper (Chace Crawford), on the other hand, is a businessman with a life of his own and a much hotter girlfriend (at least that’s how he describes her) and is enjoying it. Well, actually he needs a break from it and nothing brings him back to an uneven family like his and Toph’s mother getting married at a low-cost wedding.

Toph wants to hang out with Cooper longer than his planned stay of two days and invites him to their father’s old cabin in the woods where it is stated a homeless man is currently squatting. When the two brothers get there, there’s no squatter, just a mess of their dad’s stuff. After a brief argument about how their mother wanted them to talk to each other, the two finally decide to go home. Unfortunately, Toph’s truck battery isn’t working, and Cooper doesn’t know anything about getting cars to get running again. (Toph states “The battery’s frozen” to which Cooper suggests “We could start a fire in the car to thaw it out.”) Yeah, who’s supposed to be the smart one again?

Anyways, the fire destroys both the car and the cabin, meaning no transport, or shelter and the brothers have to hike 10 miles down the mountain. But as Cooper and Toph travel downward, they come across much worse issues than a ruined shelter, thanks to some drugged cookies and klutzy shenanigans all the way down the mountain.

This was a very interesting film to watch. The cinematography of the mountain was breathtaking, the humour between these two opposites was very entertaining, and it’s amazing what someone can make out of a very simple concept. Having a brother myself, I tend to cherish the bonds we make together occasionally, I’m just glad we haven’t experienced anything like this movie…yet.