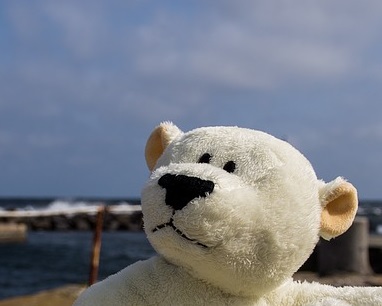 This follows the story of a sad pathetic man named Jacques (Joel Enriques). Well, at least that’s what I think. If you saw someone walking around with a giant stuffed animal, what would you think?

Actually, it’s pretty understandable because this movie takes place at an amusement park. Obviously, Jacques won his furry friend as a prize and he takes it with him everywhere. We start out with him getting in line for a roller coaster, and then riding said roller coaster where he has the most humdrum expression while everybody hollers. Jacques doesn’t react at all. Okay, well maybe I saw him smirk somewhere along the way, but that’s not as important as the bear riding with him while the ride pitches around.

After those two minutes, we get footage of more prized animals, like frogs, monkeys, bears, an elephant, and then we’re back to Mr. Manly as he piggybacks Mr. Fluffy through the park. Another long continuous shot.

Was there really any point to this? Everything this guy did, he did with a giant teddy. Using the restroom, ordering food, even smoking. What does the stuffed bear build up to? I’m not even going to bother telling.

The ending explains everything, but this film was just weird. During the wide shots of the park, it was almost like Jacques was in a Where’s Waldo? puzzle. The action and story was lacking, and I’m not sure everything was choreographed like described. I saw several people stare into the camera, one being a little girl. I don’t know who distributed such weirdness but they- Wait.  French-Canadian short film, with an awkward story and humour that I don’t quite get.