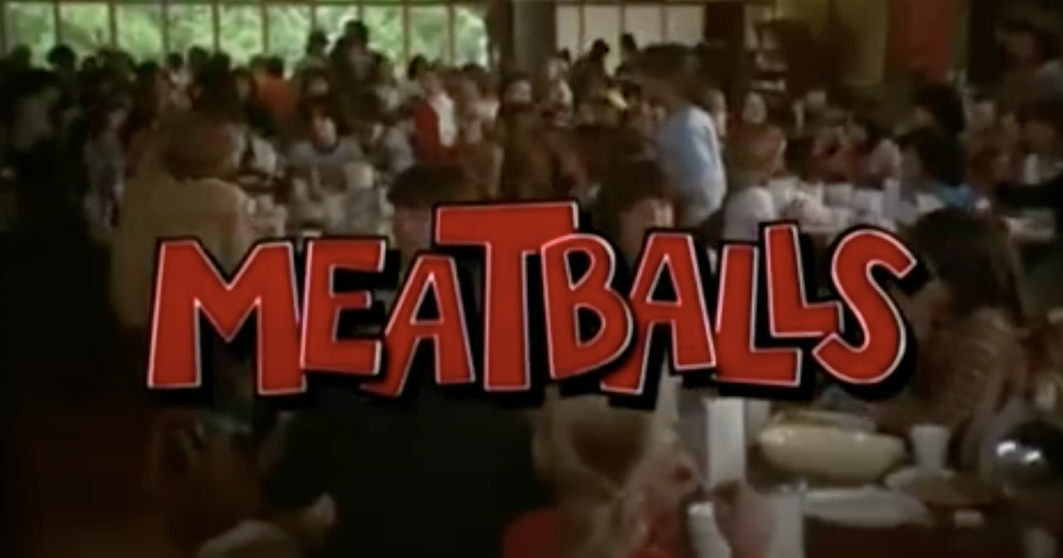 After last week reviewing Jason Reitman’s latest comedy, 2018’s Tully, it seemed apt to take a look at the 1979 comedy Meatballs, which is the directorial debut of his father, the legendary Ivan Reitman.

However, Reitman is not the only artist making his debut in Meatballs. The great Bill Murray, who had already made a name for himself as a cast member of Saturday Night Live at the time, plays the lead role despite this being his first ever acting credit in a feature film. It was a commercial success and helped launch the careers of both Reitman and Murray, and while it’s easy to see why this first of several pairings was an instant hit with audiences, Meatballs is pretty standard fare that is nonetheless uplifted by a big beating heart.

The film centres primarily on Murray’s Tripper, a head counsellor at Camp North Star, a modest summer camp which neighbours the illustrious Camp Mohawk, attended by pompous children and counsellors from rich backgrounds. Tripper and the other counsellors engage in various hijinks and pranks, primarily directed at their camp director Morty (Harvey Atkin). During the course of the summer, Tripper takes lonely camp attendee Rudy (Chris Makepeace) under his wing while also helping his fellow counsellors defeat Camp Mohawk in the annual Olympiad, to whom they lose year after year.

Unlike Animal House, which had released the year before and was produced by Reitman and co-written by Harold Ramis (who has a writing credit here also), Meatballs is a much tamer affair without the gross-out gags and irreverent humour. Instead, the film opts for a feel-good approach with its easy-to-like characters who actually give a damn about their work and the kids for whom they are responsible, which feels oddly refreshing despite being a film from 1979. That does not mean the movie lacks the compulsory gang of sexually frustrated teenagers vying for the attention of the opposite sex. In fact, it is a large driver force in the film’s narrative, which is overtly simple, propelled more by the interactions between its characters rather than the underlying goals or themes.

While there is no tangible sense of growth to any of the characters in the film, bar Rudy, they are nonetheless likeable and good natured, making it easy to root for them as protagonists, which is made easier again when compared to the villainous Camp Mohawk, collectively two-dimensional as they may be.

Reitman’s wisest decision as director, however, was allowing Murray to flex his improvisational skills. Meatballs is proof that even in his first official role Murray had already largely fleshed out the shtick that he has become known and loved for over the course of his illustrious career.

The script hardly lights the world on fire, but Murray’s unrelenting energy possesses that elevates each and every line he utters. Hearing him announce “Attention campers: arts and crafts has been cancelled due to bad taste,” one of many zingers Murray spitfires throughout the film, lends an air of pure naturalism that makes it clear he was a comedy star from the very first moment he graced the big screen.

With a leading funny-man so committed his craft that it is difficult to tell where the cast’s staged laughs begin and their sincere conniptions end, and a director who understood the importance of nurturing that talent, Meatballs is a treat to watch. Although, as a comedic package it is serviceable at best, with Reitman and Murray producing better material in the years that followed.