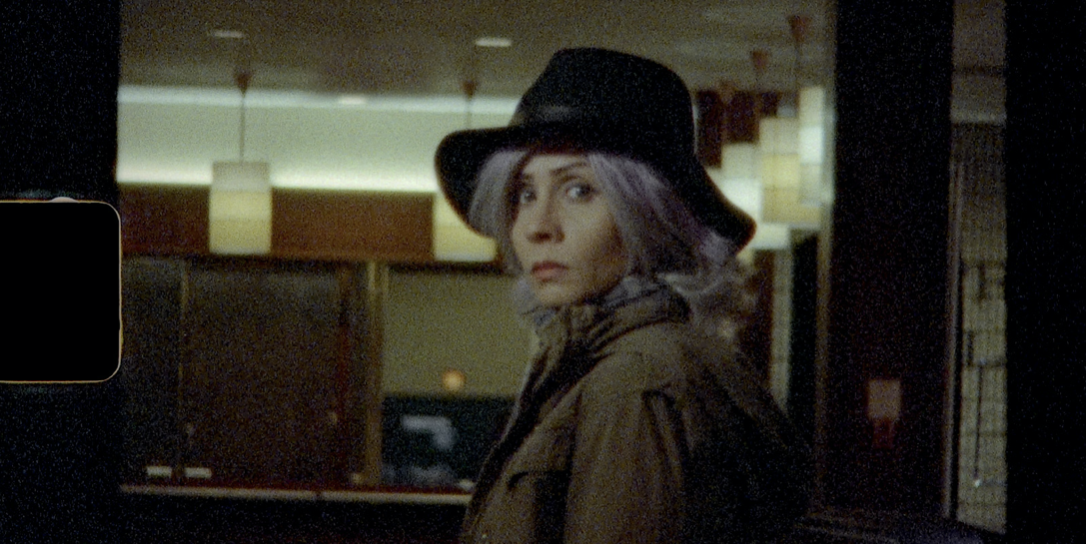 Freddy Mercury may have been lampooning the upper crust in the 1974 hit Killer Queen, but Ramin Fahrenheit’s psycho-drama of the same name keeps things much closer to the poverty line. It’s a curiosity I missed the first time at VIFF last year and as far I as I can tell, that was its only public screening. Lucky my press screener link was still working.

Rendered in ultra grainy Super8mm film stock, this cut-and-paste tale concerns the un-named “Girl” (Fatima Maziani) and her partner in crime “Boy” (director Fahrenheit). Bonding over a drug deal shortly after Girl’s release from the mental hospital, the two quickly leave a bloody mess at a home invasion gone wrong. Turns out Girl has a devil on her shoulder (Bruce Hayward) pushing her towards bloodlust at every opportunity. Unless of course it’s just the drugs talking? The fuzzy line between reality and fantasy make such deductions difficult.

Although ostensibly set in contemporary times, everything about Killer Queen from its grainy cinematography and dubbed soundtrack (which leaves an otherworldly disconnect between sound and image) to the utter lack of 21st century technology (Girl wouldn’t be caught dead with a smartphone preferring the graffiti-covered phone booth) suggests an unearthed Grindhouse feature pried from a 42nd street basement.

This is a non-linear presentation, but you’d be forgiven for having trouble putting the pieces together. Even the jumbled narratives of Tarantino and Lynch have a noticeable flow whereas I found myself constantly re-setting for characters who had yet to earn my empathy or even interest. Fahrenheit is utterly flat as Boy and should have stayed behind the camera (as writer, director, cinematographer and editor, he had more than enough to do). Maziani has presence but fails to launch Girl off what little was given on the script pages.

Where Killer Queen earns any staying power is in the aesthetics. The grainy and jittery small-gauge film enhances the grimy universe and the Carpenter-esque score by Norman Orenstein serves the mood exceedingly well throughout. There’s a slight thrill in witnessing a film that seems almost forbidden in its very existence.

In a market saturated with the slickest digital polish money can buy, Killer Queen‘s grime is almost a breath of fresh air. Its structure may demand a second viewing but I’d be hard-pressed to be willing to give it another 88 minutes of my time. Like Girl, I may have in fact dreamed the damn thing up.