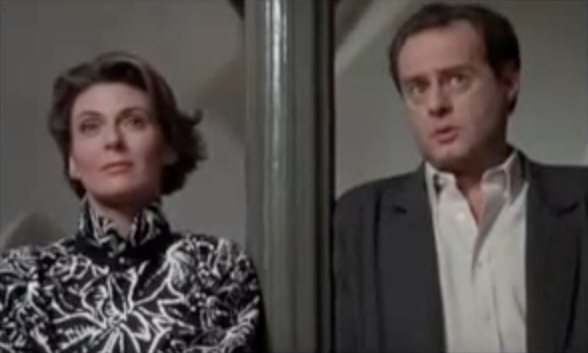 One of the major reasons I love cinema so much, is that it has such a grand capacity for escapism. While I feel it is essential to be engaged by grounded and challenging cinematic works, the worldview painted by them can often be a bleak one at best. As such, I believe the thought-provoking work which still leaves a lasting smile on your face is just as vital in cinema, and I can scarcely think of a film that had me smiling as much as Patricia Rozema’s I’ve Heard the Mermaids Singing.

Released in 1987, this Toronto-based film depicts the life and fantasies of one Polly Vandersma. Polly is a 31-year-old secretary employed at a temporary work agency, though her seemingly aloof nature means she is unable to hold down a position in any one place for too long, even when considering the short-lived nature of her work. Everything changes, though, when she is sent to work for Gabrielle St. Peres (Paule Baillargeon), a curator longing for recognition of her own.

What follows, then, is a charming, short, and funny film which stands as a wondrous accomplishment on Rozema’s part, while her greatest triumph here, Polly, is one of the most believably sympathetic characters I have ever encountered in a film. Period.

Polly is kind, caring, considerate and quirky, if not totally in tune with the world around her. Even from the earliest of scenes, Polly comes across as one of those rare creations that is fully formed before anything else; that Rozema could let the scenarios, especially the comedic ones, build naturally around her while writing the screenplay. I particularly got this sense in one scene where Polly dines with her boss in a Japanese restaurant lacking any furniture that rises above the knee, and Polly was predictably, but hilariously, out of her element.

However, these are aspects of her character that make her likeable, not necessarily sympathetic. The source of our sympathy is grounded in the tragedy of Polly’s character, which she tries to hide behind her almost perpetually upbeat personality, only to be betrayed by her infrequent fantasy sequences. Initially playful, the fantasies eventually reveal an innate insecurity in Polly that starts to bleed into her actual life, revealing a significant gap between her desired self and who she outwardly is as a person, which to this critic is utterly relatable and terribly tragic.

Polly is also supported by a strong but small cast of secondary characters, most prominently her boss, the richly written and acted Gabrielle, who provides a wonderful contrast for Polly, right up until one realises that she is no less insecure than her secretary. I believe Gabrielle is also the primary bearer of Rozema’s feminist ideals, which are in no way overbearing or preachy, but rather one organic facet of a deceivingly layered cinematic work.

On that note, I’ve Heard the Mermaids Singing has a lot more to say than any film 81 minutes in length has a right to, and was an absolute privilege to watch from start to finish. Rozema deserves most of the credit here, having constructed a relatable, cohesive film that made me care about a character in ways few others have…but it would be unfair to leave my praise at that. Although the screenplay is perfectly constructed to elicit sympathy from the audience, giving McCarthy plenty to work with in the process, the actress still transcends any initial expectations that could have come from the script alone, perfectly framing Polly as infinitely likeable and wonderfully weird, while still being quietly determined in her own way. This is a triumphant masterpiece of Canadian cinema. Period.