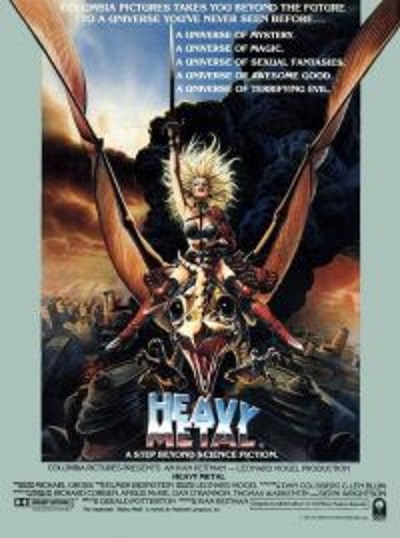 It’s interesting what one can discover when they’re hardly doing anything at all. Over the weekend, I came across an adult science fiction movie called Heavy Metal. First, a little backstory: The movie was based on a science fiction comic magazine of the same name, and every issue was filled with stories of dark fantasies and erotic cartoons. Originally published in France by multiple international artists, a publisher discovered the magazine and republished it for the United States, as he felt people there would find these comics interesting. A few years later, several of the magazine’s most common serials were adapted together into an animated movie done by several animation studios but with less graphic depictions than the series themselves.

At the beginning of the movie, an astronaut comes home to his daughter with a present from outer space: A glowing green orb. However, simply touching the orb dissolves the poor spaceman, and his daughter is pinned against the wall, panicking as this orb called the Loc-nar talks to her, explaining how he has influenced societies throughout time and space.

One of the first stories takes place 16 years from now, in New York. A taxi driver named Harry goes through his typical life all while narrating it in his mind. Then right out of nowhere he rescues the daughter of a curator who now has ownership of the Loc-nar. However an alien gangster by the name of Rudnick also wants the Loc-nar and offers a huge fee for it. Soon enough, Harry realizes he’s stuck with the decision of either dying or helping the girl give up the Loc-nar to Rudnick.

Elsewhere in another time period, a wimpy teenage geek is teleported to another world by the Loc-nar, where he is transformed into a muscle-bound man and rescues a woman from being sacrificed by a cult. Other stories include a guilty captain being defeated in space-court by his only witness, a B-17 bomber under heavy attack, a robot who discovers love with a girl he accidentally abducted, and a warrior maiden who battles against a tribe of barbaric mutants.

I have to admit, this is  way different from any animated film I’ve seen lately. Some of the stories are a little interesting, while others are a little too awkward for my taste. The animation is pretty well done even if it has a fair amount of nudity, violence and other crazy things you wouldn’t expect to see in Saturday morning cartoons. The soundtrack is quite catchy and upbeat. And no, not all the music is technically heavy metal, otherwise it wouldn’t be very audible. Not exactly my type of movie, but it was okay for something based off a comic magazine.