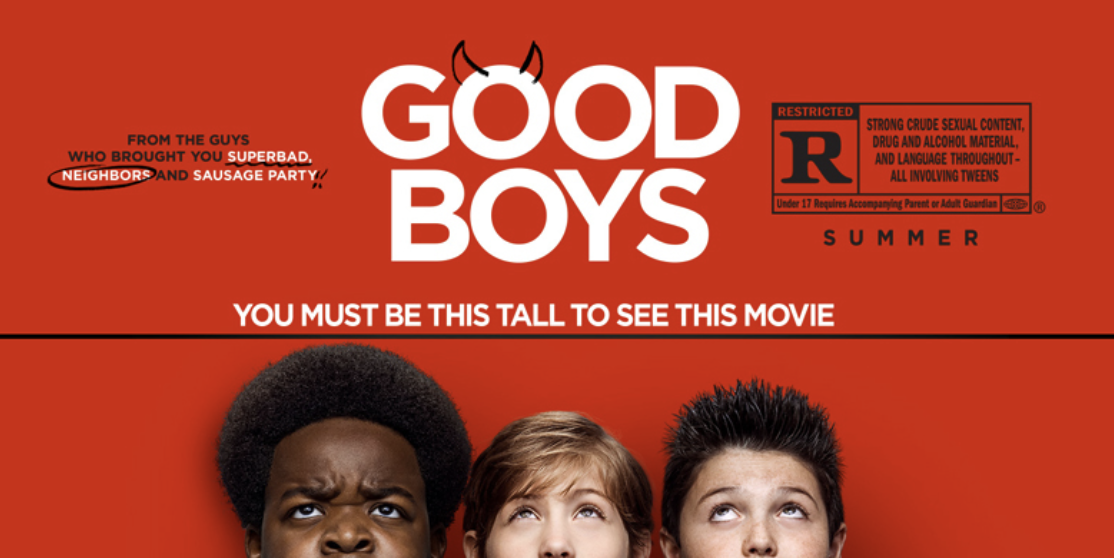 A decent R-rated mainstream comedy is a rare beast these days. With studios clinging to the more box office-friendly PG-13 rating for nearly every genre under the sun (horror notwithstanding), you might have better luck spotting a unicorn than having a raunchy, drug-fuelled, profanity-laden laugh fest connecting with an audience. While Seth Rogen hasn’t made me laugh on screen in a while (Charlize Theron alone carried Long Shot), he and his producing pal Evan Goldberg have delivered a comic gem with their latest release, Good Boys.

Deep in the leafy suburbs of Vancouver….I mean Illinois, pre-teens Max (Jacob Tremblay), Thor (Brady Noon), and Lucas (Keith L. Williams) have grown up as “The Bean Bag Boys” since kindergarten (the name derives from their clubhouse sporting bean bags as another character deduces) and are now scoping out the unfamiliar territory of the sixth grade. When Max manages to snag an invite to a cool kids party where some serious kissing will go down, he sees this as the chance to finally act on his aching crush on Brixlee (Millie Davis). Thor sees the party as a chance to redeem himself for failing to drink a beer leading to the unfortunate nickname “sippy cup” and Lucas will do anything to escape the household turmoil of his parent’s divorce (Lil Rel Howery and Retta in extended cameos).

Fearing the idea of turning off Brixlee with his lack of kissing skills, Max leads the others on a mission to crack the ancient technique. When an ill-fated Google search and experiments with a very detailed “CPR doll” (*wink) go awry, the trio decide the only way to master first base is to see it first hand. This apparently requires the use of a drone belonging to Max’s dad (Will Forte) which he is absolutely forbidden to touch so that goes nowhere. Just kidding, within minutes they fly it over their neighbour Hannah’s (Molly Gordon) house in an attempt to spy on her and loser boyfriend Benji (Josh Caras). Unfortunately for them, the not-so-power couple has just broken up and the drone is promptly captured by Hannah and gal pal Lily (Midori Francis). Knowing that a swift grounding will follow if he doesn’t retrieve the drone by the time his Dad returns from his work trip, Max and co embark on an epic journey of hijinks and off-the-wall adventures involving chases, treacherous highway crossings, drugs, paintball and an unusual amount of sex toys (all involving tweens as the ratings board was kind enough to point out).

Good Boys wears its R-rating with pride (see poster above) with the first lines out of Max’s mouth being “Fuck me!” as he surfs a porn site on his laptop. While many will likely clutch their pearls at such foul-mouthed younglings, any honest person who was once that age knows that’s how kids talk as they live in the real world after all. What would likely have been tired material had the characters been teens or above is given new life by having the comedy stem from the boy’s misunderstandings of the world around them. From mistaking sex toys as weapons to believing that four sips of beer makes them alcoholic, the laughs come fast and furious with the audience in my theatre nearly rolling on the floor.

This material is capably handled by the film’s superb cast. Long restricted to more melodramatic fare, Tremblay conducts himself well as the straight man of the group with his TV-based co-stars Noon and Williams taking laughs left and right with the latter in particular standing out. They’re so effective that you just might forget how absolutely ridiculous and unnecessary most of this adventure is as it could’ve all been avoided with a Google search that didn’t immediately start with “porn” (even Molly and Lily point this out). But as long as you’re willing to suspend that bit of disbelief, the film rewards handsomely in sheer fun.

Arriving as either an aged-down Hangover or more looney Stand By Me, Gene Stupinitsky’s Good Boys guarantees a side-splitting time at the cineplex. Now if they could only swap those Illinois licence plates for BC ones.

Good Boys is currently screening in theatres across Canada