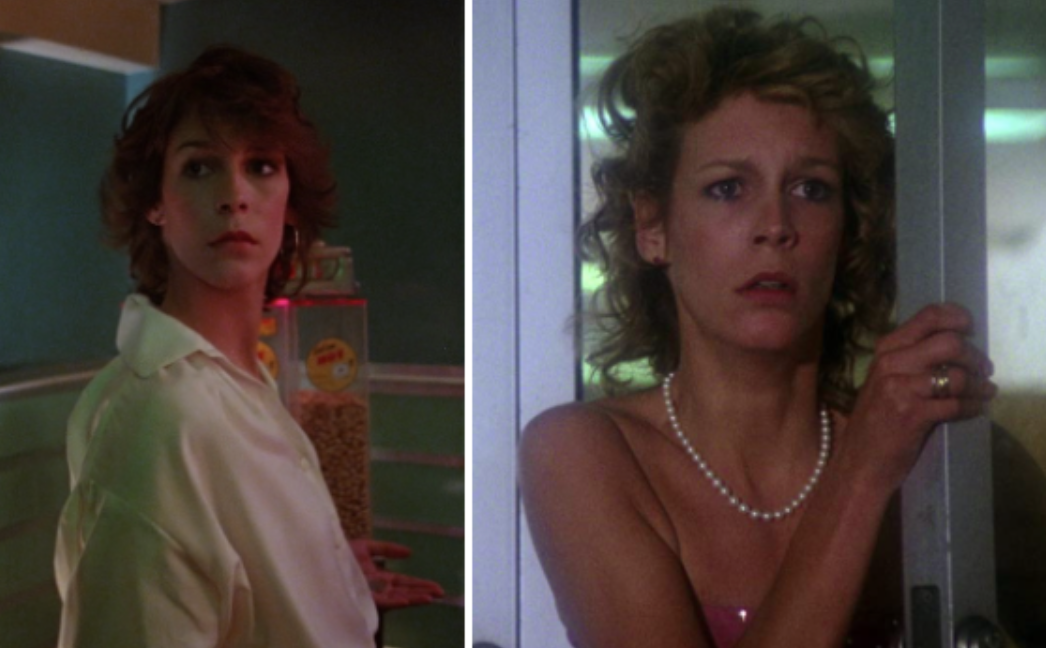 With the latest installment in the ever evolving and meandering Halloween franchise now slashing through theatres, Jamie Lee Curtis has arguably reclaimed her “Scream Queen” crown that defined her early screen career. Between bouts with super-slasher Michael Myers, Curtis found the time to share the screen with other serial killers, including one in her disco-flavored 1980 flick, Prom Night.

Six years after young Robin Hammond (Tammy Bourne) is accidentally killed in a game of hide-and-seek gone unusually wrong (Kids, don’t play in abandoned buildings), the four now-teenagers who were involved in the incident find themselves with a target on their backs as a shadowy-stalker first crank calls, then hunts them between disco tunes at the senior prom. Oh yeah, a pre-Airplane! Leslie Nielsen is in the movie too.

There’s not much more to say about TV-veteran Paul Lynch’s early slasher vehicle. While there are a few editorial touches visual flourishes worthy of Hitchcock (a bloody corpse cuts to a bowl of red punch), the majority of the runtime is a slow slog of nearly an hour before any slashing commences and most of it plays more like a lame game of tag than a legitimate stalking game. Major points go to a delicious decapitation of one character however.

The actors fulfill their types (I hesitate to call them “characters”) well enough to earn their paychecks while Curtis plays one of the most passive protagonists of her entire career, not being meaningfully involved with the story until the climax. While this has been heralded as a classic of the slasher genre, I’m willing to bet most of its cache comes from being a relatively early entry and an inferior one at that.

Horror aficionados or historians might find Prom Night worthy of adding to their collection, but today’s audiences would be wiser to seek out the superior (if PG-13 rated) 2008 remake or perhaps this film’s disco-fuelled soundtrack.

Prom Night can currently be streamed on Prime Video

“Anybody seen my girlfriend? She’s the one with the big caboose!”

Terror Train may share the star and basic revenge plot with Prom Night, but the similarities mostly end here as reliable journeyman director Roger Spottiswoode delivers a better paced and superior entry in the early years of the slasher genre.

Three years after a freshman prank gone horribly wrong, an unnamed medical college fraternity is looking to ring in the New Year with a masquerade bash on a special excursion steam train. The key players in the aforementioned prank are all aboard including ringleader Doc (Hart Bochner), girlfriend Mitchy (Sandee Currie), best buddy Mo (Timothy Webber), and prank-bait Alana (Curtis).

It doesn’t take long for blood to stain the festivities as one-by-one, partying students are knocked off in discreet and painful ways. The killer is smart and able to use his victim’s costumes to move freely and evade detection by the increasingly suspicious conductor (Ben Johnson). With no radio and bad weather ahead, this train will have to go to hell and back before reaching the station.

Like many of its contemporary brethren, Train was conceived as a knock-off of the 1978 Carpenter classic (“Make Halloween on a train” said executive producer Daniel Grodnik), but this unpolished gem manages to exceed its commercial origins and deliver a gradually accelerating thrill ride as only the 80s can.

Curtis has a more active role this time around, forced to reconcile with her role in the prank that initiated this round of chaos and carnage. The carnage and thrills are well-paced and many of the building blocks for future slasher pics (especially the “killer-out-for-revenge” sub-genre) are clearly visible.

Perhaps I’m a touch biased given my penchant for trains and most pictures featuring them, but I’m glad to have discovered this slice of slasher-lore in time for Halloween and hopefully you will too. All aboard. 😉

Terror Train can also currently be streamed on Prime Video