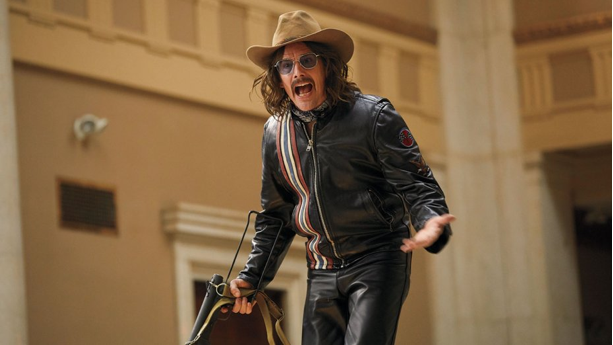 “Stockholm Syndrome” has long been known in mainstream vernacular as a condition where the victims of a kidnapping develop a bond with their captors which can result in their refusing to co-operate with the police, assisting in captor’s escape or in some cases even joining their cause. What the general public may be less familiar with is the incident for which this contested illness was named. Ontario auteur Robert Budreau once again teams up with Ethan Hawke for a fictionalized re-telling of the legendary Norrmalmstorg Robbery in the comic thriller Stockholm.

The year is 1973 and while the rest of the world is pre-occupied with an impending oil crisis and the sudden death of Bruce Lee, Swedish-born, but American-raised Lars Nystrom (Hawke) is preparing for what appears to be a brazen robbery of the Kreditbanken in Stockholm’s central business district. It in fact turns out to be a ransom play to spring his older brother Gunnar (Mark Strong) from the slammer. This along with US $1million and a “Mustang 302 like Steve MacQueen had in Bullit” will buy the freedom of the three bank employees taken hostage including steadfast wife-and-mother Bianca (Noomi Rapace).

As you can guess in any scenario with a feature-length runtime, things don’t quite go according to plan as the Swedish Prime Minister (Shanti Roney) stubbornly refuses to allow the brothers to leave the bank with any hostages despite Lars’ insistence that he will start killing them if his demands aren’t met. But as we’ve come to suspect from his less-than-malicious conduct thus far (he shoots a gun out of a cop’s hand cowboy style rather than ice him), Lars has no actual intention of killing anyone in his charge as he convinces Bianca to help fake her own death with a sleight-of-hand involving a stealthily placed bulletproof vest.

It is this act that gradually convinces Bianca that Lars has no intention of actually harming them. She may even starting to find him attractive against her better judgement Growing frustration with their government and the increasingly blithe tactics of hard-nosed Police Chief Mattsson (Christopher Heyerdahl) to end the crisis drive the three hostages to cooperate with their captors to see this scheme through and perhaps have a little fun along the way.

It takes a talented cast and a sure directorial hand to make us empathize with violent criminals and fortunately Stockholm delivers on both. Ethan Hawke is perfectly at home as the out-of-his element protagonist. His bark is far more prominent than his bite as he certainly embraces the image of the classic American Outlaw (wig, cowboy hat and all) if not the actual bloodshed. He’s not afraid to fire his gun but causes relatively little damage with it. Noomi Rapace is more than credible as his captor-turned ally and Canadian character-favourite Heyerdahl chews some scenery as his adversary with a serious axe to grind.

Budreau wisely keeps things light with a steady camera and a steady stream of comic beats so that the audience is never too uneasy. Like the hostages themselves, you end up being far more worried about collateral damage at the hands of erratic law enforcement than anything the criminals themselves are likely to dish out,

Despite a solid beginning and middle, the film falters in it’s final act, particularly the ending scene. I won’t spoil it here for you, but either the filmmakers didn’t bother to write a satisfactory conclusion leaving things rather untied, or perhaps the camera just ran out of film. No filmmaker should underestimate the importance of a satisfying ending as a poor one can undo a lot of audience goodwill built up over the runtime.

That being said, theres enough goodwill left on my part to leave this film with a positive rating. A good cast goes a long way in making a worthwhile moving experience regardless of how true (or in this case, absurd) the source material may be.

Stockholm is currently playing in theatres across Canada