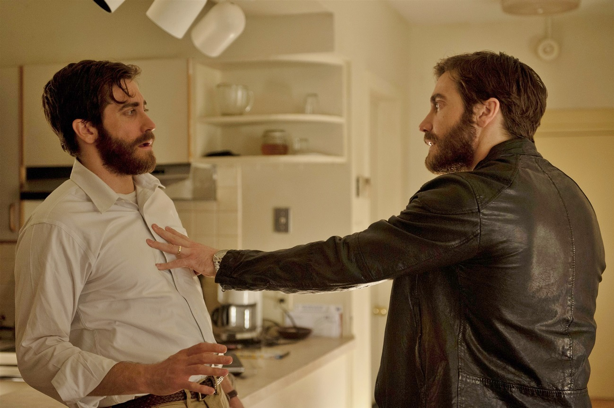 Most of us are told from birth that we are special and unique individuals, but what if you discovered one day that you weren’t so singular after all? The subject of doppelgängers has been tackled many times in fiction, but Denis Villeneuve brings a subtlety and weight to the subject in his 2013 film, Enemy.

The story begins in contemporary Toronto where history professor Adam Bell (Jake Gyllenhaal) leads a repetitive humdrum existence with even the nightly rendezvous with his girlfriend Mary (Mélanie Laurent) growing stale. His world is suddenly rocked when he spots who appears to be his double in a movie he’s rented. Some swift detective work and subterfuge reveals this to be Anthony Claire (also Gyllenhaal), a struggling actor with a pregnant wife (Sarah Gadon) who curiously resembles Mary (both are young and blonde).

Agreeing to a private meeting outside the city, the two men realize that they are startlingly similar down to physical scars and birthdays (could they be clones?), a seemingly inevitable life-swap à la Prince and the Pauper begins that reveals more than either expected and could result in serious and dire consequences for the both of them.

Villeneuve brings his usual stamp to the material with sharp performances set against a moody and thought-provoking backdrop. Gyllenhaal is in fine form as he handily tackles double-duty playing two men who are identical physically but otherwise quite dissimilar. Canadian regular Gadon also brings her usual understated skills to the table as a potential foil to both men. The film has style to spare depicting a large and imposing Toronto through a drab colour palette that successfully isolates the cast in their odd and sometimes nefarious undertakings.

Our Québécois auteur is never one to spoon-feed his audience which leaves much of the plot open to interpretation. This can work well at times, but unfortunately is more frustrating here than not, especially given a puzzling revelation in the film’s final act that will leave the majority of the audience scratching their heads (if not outright shuddering). The film’s pacing is curiously drawn out despite it’s relatively short 90 minute runtime. The story becomes quite gripping once it gets going but a little editing could have gotten us there much sooner.

With his continued success south of the border (including the universally-praised Blade Runner 2049), we’ll likely continue to see much more of Villeneuve in the coming years. He has already won over the critics, but I do believe that with an extra olive branch or two, he could easily win wider favour with audiences as well. After all, Hollywood could use a few more unique voices like his.