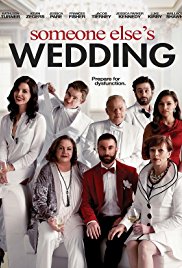 The Whistler Film Festival is an anomaly. It attracts some very unique films as well as much sought after talent representing them. You might even refer to that talent as ‘Stars to Watch’. The films have been submitted from around the globe and once chosen, the director, producer and actors sometimes travel to accompany them. If lady luck is your guide, you will find yourself landing a backflip on one of the many slopes in Whistler. If your lady luck avoids the ski hills she can also transpire in the form of an interview with a young rising star in one of those films premiering at the festival. My luck brought me the opportunity to speak with actress Jessica Parker Kennedy about her film, Someone Else’s Wedding.  She is one of four rising stars I had the incredible pleasure of interviewing when I was attending the WFF.

Without giving the entire story away, I will only reveal a snapshot of the story’s premise. Jessica plays the role of Louisa, a bride to be. Unfortunately, there is some drama from the past that involves the groom’s family and Louisa. It flares up and threatens the wedding from happening.  In addition, there is more drama that occurs between the brothers and the two moms. Chaos ensues in the form of comedy and laughter. A heavy subject told in a light-hearted way that reminds us, love conquers all.

“There is some incredible talent attached to this film, how did you become involved with it?”

“A close friend of mine told me about the script. They had mentioned that Kevin Zegers was attached to the film and the director Pat Kiely was still looking for an actress to play his girlfriend/love interest. I had always admired Kevin Zegers work and believe he’s a very talented actor that I’ve wanted to work with.  My friend suggested we talk on the phone. I spoke with Kevin about the story and then asked to read the script. I loved it and immediately made a taped audition for the director. A few days later I was in Montreal filming. It turned out to be so much fun and an amazing film that went beyond my expectations.”

In speaking to Jessica, her passion for filmmaking and performing was rooted from a young age.  Dedication to her craft had eventually paid off and led her to acting in TV. She has performed roles in an impressive list of shows, such as Santa Baby 1 and 2, Smallville, The Secret Circle, 90210, Colony and more recently, The Flash, Black Sails, Supergirl and I Love Bekka and Lucy (web series).  Most recent films you can find Jessica in are Gemini, Someone Else’s Wedding, Business Ethics and Deep Murder.

“Was there much preparation for your role in Someone Else’s Wedding?”

“I found it quite easy to get into character. This is my third film where I get married. The fun thing is, I get to try on many wedding dresses. The dress in this film happened to be red. I loved coming to set to watch Kathleen Turner and Frances Fisher act. I would watch and learn from their performances. It was a neat experience.”

Jessica had spent a month in Montreal filming. They started in November of last year when the snow started falling. She tells me on one particularly cold day it was snowing as they were making it rain for a scene. It was some of the coldest weather she’s acted in.  We sometimes forget how much actors endure for our entertainment. Achieving it with grace and a smile while your inner voice screams for a blanket and shelter requires focus and stamina. Not every scene is going to be laying poolside under a palm tree with a chilled drink in your hand.  Films have to convince us of changing temperatures and true to life experience or we stop paying attention. The actors are our guides to their reality.  The more convincing, the more we’ll keep watching.

“What was the best part about being in this film?”

“I think working with Wallace Shawn.  I had grown up watching his films. I admire his writing and creativity and it was an absolute joy to be able to talk to him every day about his career and his family. Montreal is beautiful and the food was also amazing.”

I remember Wallace Shawn from The Princess Bride, and the voice of Rex on Toy Story. He’s been in a tremendous amount of productions and I’m certain he was able to share some pearls of wisdom with Jessica.

“Do you have a preference for certain roles?”

“I love either comedy or dark roles. I loved this film because it was a quirky comedy and I’ve often worked in dark roles in the past. I haven’t worked in many roles other than those two. I’ve been lucky enough to be working in many more Indy films as of lately, which I’m very passionate about. It’s where my heart is. It’s been a great year.”

The film made its world premiere in Whistler and it was Jessica’s first time at the Whistler Film Fest. She was exceptional in her candor and a real treat to speak with. She made me feel very lucky to see her star shine bright as she glowed with enthusiasm moving forward in her exciting career. A talented actress and a beautiful personality that’s not afraid to knock on doors and engage. Definitely one to watch as her star reaches high and far.