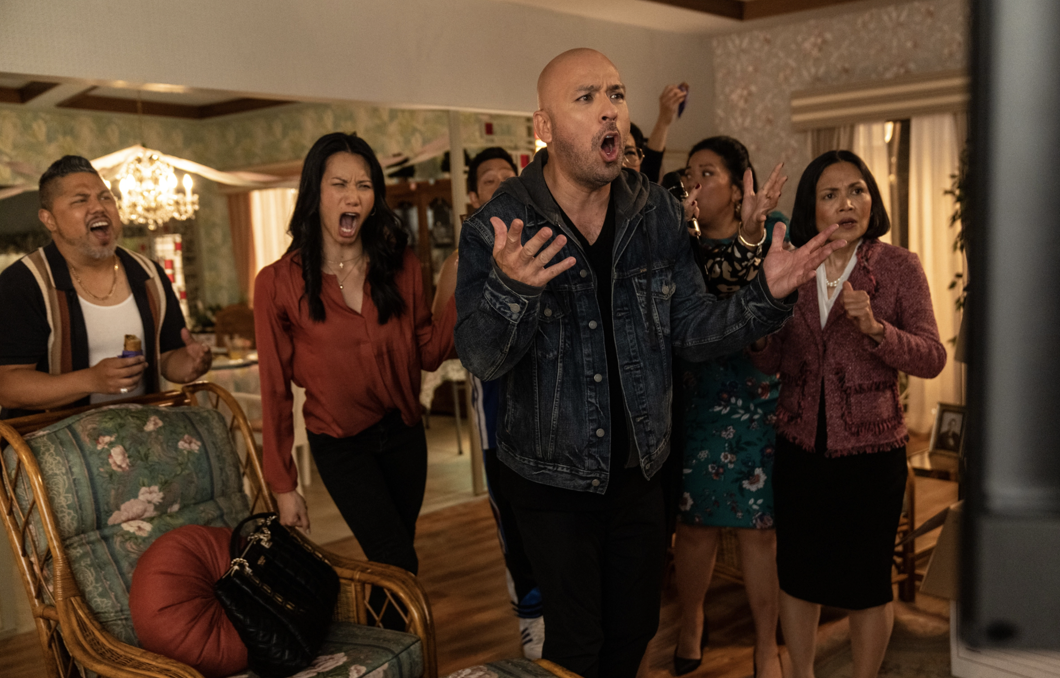 Easter Sunday is the type of film I’d normally overlook given my general aversion to “Home for the holidays” family comedies and its rather out-of-season rollout during late summer as opposed to the more title-appropriate April. To be completely honest, it was the film’s Vancouver location (doubling for San Francisco) that led me to check it out for my weekly review and the results are…mixed.

Rising comedian Joe Valencia (Jo Koy playing more or less himself) is struggling to break out of the club and into TV where he has a legitimate shot at landing a role on a major network show, but only if he performs in a cartoony Filipino accent (a device he uses in his stage act to imitate his overbearing mother). Getting nowhere with his perpetually out-of-cell phone-range agent Nick (director Jay Chandrasekhar), Joe finally decides to cave to his mother’s (Lydia Gaston) relentless invites to attend the family’s annual Easter brunch with his estranged teenage son Joe Jr. (Brandon Wardell).

He arrives to find a family at war as his mother constantly bickers with his Aunt Theresa (Tia Carrere) over matters of motherhood and cooking. This would be hard enough to deal with if not for his bonehead brother Eugene (Eugene Cordero) being $40k in debt to loony local loan shark Dev (Asif Ali) over an ill-advised “hype truck” business venture, a pickle which pretty much steers the majority of the film. This being a comedy, there’s no problem that can’t be solved with comic set pieces, young love, karaoke and a few select Hollywood cameos.

Easter Sunday is a puzzling find in a cineplex usually reserved for A-list Blockbuster fare. It’s a lower budget effort with few stars that often struggles to justify its very existence. The family plot clashes with the loan shark plot and Jo Koy’s comic personality only goes so far in keeping the endeavor entertaining. He scores enough points with the audience to remain likable, but one wonders if this often wacky story might have worked better as a re-enacted stand-up routine than a $17 million dollar film.

He is helped a little by some inspired casting choices including Gaston who grounds the film as Joe’s overbearing-but-loving mother and dragged down by others like Wardell who seems to have forgotten to bring a personality to set. Lord knows what on-screen crush Talla (spunky Eva Noblezada) sees in this cardboard box of a human.

Easter Sunday is a win for Asian-American representation, Jo Koy’s screen visibility and honestly very little else. It’s an odd film composed of even odder choices. How much you get out of Jo Koy’s feature debut might ultimately depend on how much you can relate to the man and his lived experience. The rest of us might find ourselves being the only non-Filipino in the theater as the credits roll.

Easter Sunday is currently screening in theaters across Canada