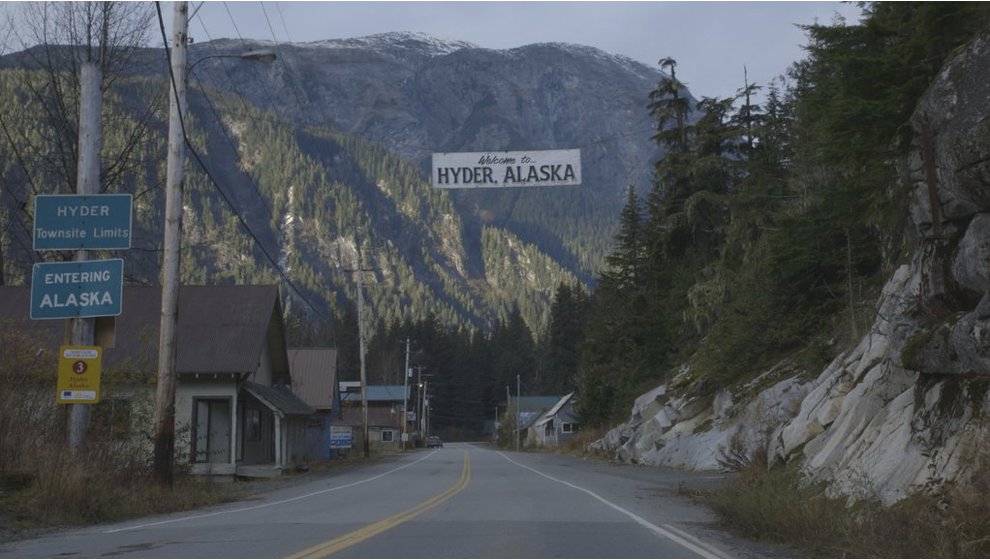 Growing up in Northern British Columbia, I had a baseball cap adorned with a cartoon ghost and captioned “Hyder, Alaska”, one of many ghost towns in North America’s post-industrial era. My parents told me we had taken a boat out there from Prince Rupert when I was 3 years old although I have no memory of the visit. Viewing Tony Massil’s contemplative doc The End From Here a quarter century later, the lack of recall could be explained by the near invisible border between the remote American outpost and Stewart, BC where Hyder’s townspeople rely on for many basic supplies and services.

According to one sign, Hyder is a “town of a hundred happy people and a few old shitheads”. Whether the three subjects of Massil’s northern foray fit the latter description is up for interpretation. We’re first introduced to Jim Russell who relishes the seclusion of the northern wilderness giving him ample time to restore old machinery with just enough left over to keep up with the 2016 Presidential Election via cable. Ken Olsen proudly wears the title of crazy cat man as he allows his house to be overrun by feral felines that may outnumber the town’s human population. Keeping the town’s national park, library, and elections running is Carl Bradford whom easily wins for wildest hair growth out of the trio.

There’s little overlap between the these guys onscreen. Jim votes at the library under Carl’s supervision and is later visited by Ken who offers stove kindling in the form of the abundant Amazon boxes littering town. Other than that, the men spend time expressing various musings on politics, nature, science and science fiction while only hinting at past family traumas that drove them to Northern solitude.

Massil had previously explored aging subarctic denizens in his 2008 short Forty Men for the Yukon. Perhaps he should have stuck to the short form as this film’s subjects are hardly worth the 72-minute runtime which still needs extra nature b-roll to help bump it up to feature length. It’s not that these guys don’t come up with interesting things to say like the militancy on climate change consensus or society’s poor attitude towards cats. We’re just never really given enough to adequately identify with them. Hell, Massil doesn’t even bother to divulge their names either on screen or through dialogue which forced me to Google supporting material just to write this review. It’s context-less Cinéma Vérité at its most frustrating.

The End From Here holds more potential in its festival write-up than the final product. Would these guys have merited the documentary treatment had they lived somewhere less secluded like Medicine Hat or Cape Breton? By this time next year, I’ll still be more likely to remember Hyder through that long-lost baseball cap than I will from this ambling slice of life.

The End From Here screens as part of an online DOXA available to view anytime between June 18 to 26.