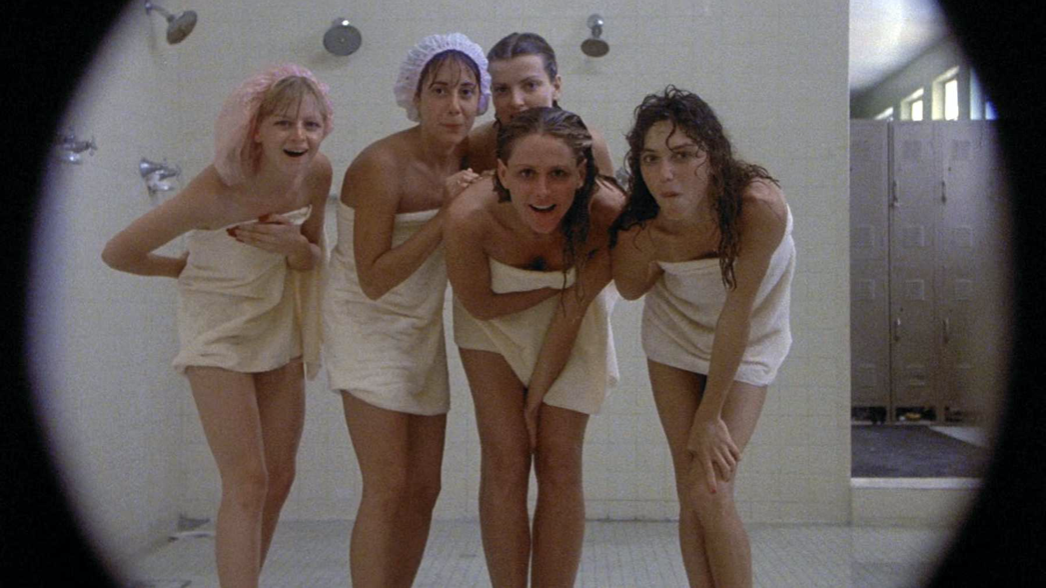 Long after he made the snow-covered streets run red in Black Christmas and just prior to lensing the nostalgia-fest Christmas Story, American-born director Bob Clark utilized Canada’s generous tax-shelter film policy once again to bring his adolescent memories to the screen in what turned out to be the highest-grossing Canadian production for over two decades: Porky’s.

Set in the fictional seaside town of Angel Beach, Florida in 1950-something, the plot quite loosely hangs off the quest of a tightly-knit band of high school buddies to get laid before graduation. Taking a tip from country boy Mickey (Roger Wilson), the group heads out of town to infamous Everglades strip joint Porky’s, run by the rotund proprietor of the same name (Chuck Mitchell). After paying $100 for 30 minutes with three girls, the minors are promptly ejected from the club in the most humiliating way possible with the help of Porky’s corrupt brother Sheriff Wallace (Alex Karras).

Mickey promptly swears revenge despite the warnings of his older cop brother Ted (Art Hindle), but the others are a little distracted by several subplots. Pee Wee (Dan Monahan) is desperately trying to live down the time he wore a condom to a date with school heartthrob Wendy (Kaki Hunter). He joins buddies Billy (Mark Herrier) and Tommy (Wyatt Knight) in sneaking a peek at the girl’s shower, much to the enragement of Coach Beulah “Ballbreaker” (Nancy Parsons). This at least distracts her from the pursuit of her assistant Miss Honeywell (Kim Cattrall) by assistant coach Roy (Boyd Gaines) who is on a mission to determine the origin of the former’s nickname “Lassie” (the answer lies in the spare equipment room). And in the film’s lone instance of any real depth, star athlete Tim Cavanaugh (Cyril O’Reilly) brings his father’s bigotry to the locker room as he constantly hazes fellow Jew student Brian (Scott Colomby) who won’t take it much longer.

As all these side-quests (plus a few other gags) wrap up, we finally return to what I guess is the main plot as after waging a one-man war against Porky and Co, Mickey has taken one beating too many and the rest of the gang finally gets in the act to plot the ultimate revenge. Porky better have his insurance paid up.

Porky’s grossed over $130 million worldwide upon it’s wide release in 1982 and was soon followed by two sequels. I have to assume it was unleashed on the world at the right place and the right time because there’s not much cinematic excellence or even competence to be had here. The film plays like a re-enactment of tall tales the writer/director spun at the bar and filmed verbatim. Pretty much everyone on screen is a walking stereotype with only Colomby and O’Reilly showing any real depth or character growth. Modern audiences might say the problem lies in the shocking and politically-incorrect raunchy humour on parade, but I’d argue the real problem is that there’s no real drama or character to ground the wacky proceedings. Pranks and schemes are fine, but if I don’t care about anyone involved, why bother dragging it out feature-length?

It’s a rather sobering footnote that the most successful Canadian film for nearly 25 years (before being dethroned by Bon Cop Bad Cop*) was shot and set in America featuring a principally American cast overseen by an American-born director. The film is really only Canadian for tax purposes or at most another credit for familiar Canuck faces like Art Hindle or Doug McGrath. It has value as a case-study for what was and is wrong with the Canadian film industry and for a decent laugh or two. Otherwise, there are much better places to get your 1950s coming of age fix (My American Cousin anyone?).