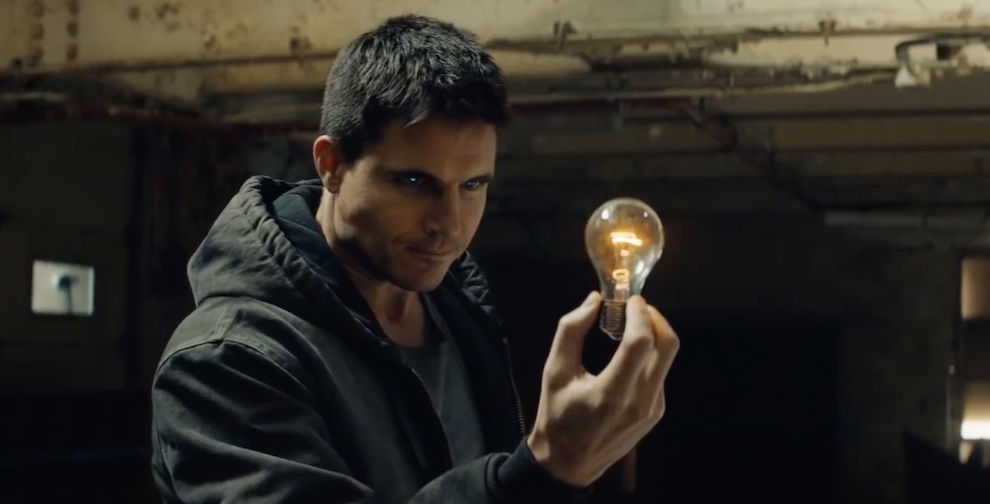 Stephen Amell might have concluded his long run as DC superhero Oliver Queen/Green Arrow on the CW TV show Arrow and its spinoffs The Flash and Legends of Tomorrow, but if 2019’s Code 8 is any indication of what’s to come in his post-Arrow career, then there’s plenty to be excited about.

Written and directed by American filmmaker Jeff Chan and shot in Toronto, Code 8 earned my attention from its very opening credit scenes, which effectively conveys a world and history wherein superhuman beings, or the ‘power enabled,’ were once an esteemed part of the workforce in the fictional Lincoln City, but are now treated as second-class citizens by a wary society. Connor Reed (Robbie Amell) is amongst the vilified minority of the power enabled, struggling to make ends meet while his mother (Kari Matchett) is slowing dying from the very power she possesses. With the medical bills piling up and few options left, Connor is given the opportunity by Garrett (Stephen Amell) to pursue a life of crime that could save his mother, but with great cost.

First, I must commend Chan for delivering a rather fresh twist on the superhuman science fiction genre, as Code 8’s premise doesn’t just allow for an engaging, immersive story, but also some rich subtextual analysis of racism and, if I’m not mistaken, immigration.

That’s not to say Code 8 is breaking any new ground. The most obvious comparison to make would be the X-Men series, but it can also feel uncannily reminiscent of films like Josh Trank’s Chronicle and Neil Blomkamp’s District 9. In the latter’s case, not only does Code 8 have an eerily similar title, but its police robots, or ‘guardians,’ even resemble Chappie, the titular character and cybernetic lead from another Blomkamp film. The influences are clearly there, yet to Chan’s credit Code 8 never feels fatally derivative.

Chan also adds his own stylistic flare to the action sequences, which, given the film’s setting, could have been a recipe for Bay-esque explosions and chaotic editing. Instead, Chan executes these scenes with kinetic cinematography that is accompanied by coherent editing, and whilst the film can be violent, it’s never aimless or gratuitous. The restraint here from Chan is laudable, and it’s a wonderful trait for any budding filmmaker to have.

Of course, this would all be for naught without narrative substance and the performances to go with it, and thankfully the film delivers on both these fronts. Connor’s story of doing bad in order to do good is one that’s been told time and again and could have come off as contrived, but the pairing of Chan’s direction and Robbie Amell’s weighted performance allows Code 8 to transcend any overt familiarity. Likewise, Stephen Amell delivers a nuanced performance that proves he has natural range beyond the conflicted do-gooder of Arrow. It’s difficult to praise one brother’s performance without mentioning the other.

It’s safe to say that Code 8 frequently caught me off guard, maintaining a consistent sense of wonderment that was abetted by its deft pace…to a point. The film’s final twenty minutes or so feel slightly rushed and undercooked, while not all resolutions of the various plot threads stick the landing.

Although the ending could have done a little more justice to its character, and a lot more justice to its well-conceived lore, it’s not enough to ruin what is a fine addition to the science fiction genre. It has firmly placed Jeff Chan on my list of filmmakers to watch, while I eagerly await the next moves of its stars/producers Connor and Stephen Amell.