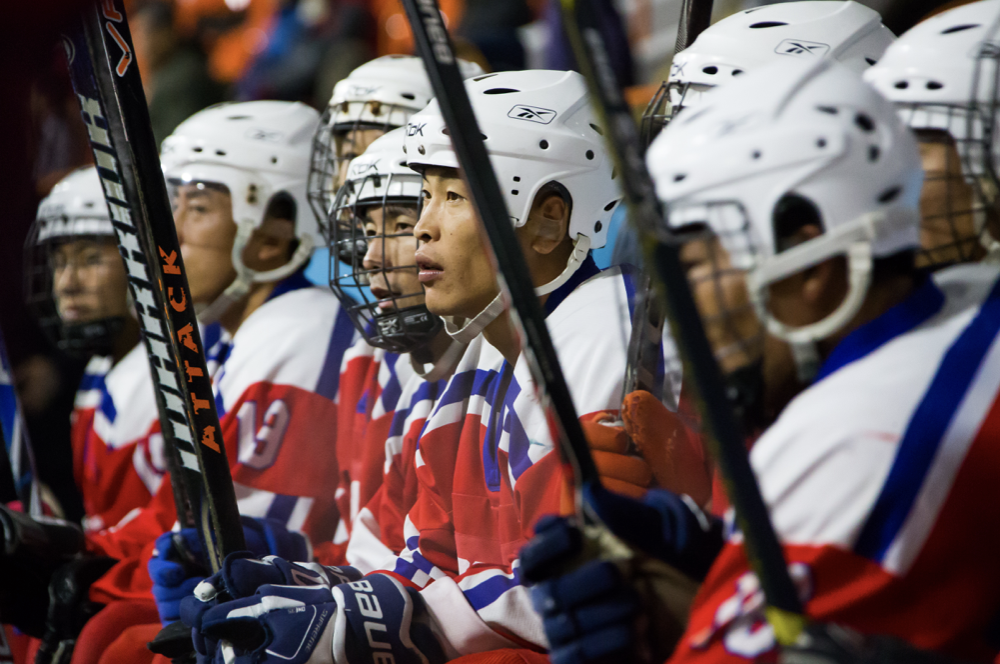 It’s not every day that a foreign film crew is allowed unfettered access to anything in the “Democratic” People’s Republic of Korea, let alone the country’s National Hockey Team. Back in pre-Covid times, one scrappy Canadian film crew was granted access to film said team on their championship journey. Making his feature-length debut, BC-based filmmaker Nigel Edwards offers this glimpse behind the world’s last iron curtain in Closing The Gap: Hockey in North Korea.

In the heart of Pyongyang, the national DPRK Men’s hockey team practice hard in order to advance to Division II of the International Ice Hockey World Championships. They endeavour to make up in speed for what they lack in power. With no capitalistic profit motive here, the team instead play to bring recognition and glory to their homeland and Party leader Kim Jong Un (appearing here only in creepy propaganda murals).

One international flight later (remember those?), they find themselves in the Championship host country of New Zealand where they will take on teams from Mexico, Turkey and Israel among others. It will be a long, hard and often fruitless battles with culture clashes, scoring challenges and mounting injuries testing the team’s resolve. Like any decent sports drama, it ain’t over ’till the final buzzer.

For a film that posits itself as a riveting underdog sports story, Closing The Gap seems oddly intent on boring its audience to death. While it may be a subtle commentary on how those living under a fascist regime tend to blend together, the film’s utter lack of defined characters to identify with give the audience very little to grasp onto. The players are there, but you forget about them soon after the film cuts away from their interview. It’s not that there’s not a potentially interesting backstory about these mostly-country boys plucked from obscurity to represent their homeland on the world stage, it just never feels like we truly get to know them and that’s a real shame. Oddly enough, it’s the interviews from outside the team that do more to build a bond with the audience such stories of past games with DPRK from people like NZ coach Maru Rout.

And even those talking heads are a lacklustre affair with insider jargon thrown around, thus freezing out the non-hockey fans in the audience (I’m a football guy). All combined with a limp narrative thrust and a plodding score that barely belongs in a yoga class, you might find yourself looking up classic ice match-ups on YouTube just to blink yourself to life again.

It’s no surprise that the most interesting parts of Closing The Gap are the brief glimpses we see of everyday North Korean life at the bookends of the film. Perhaps there were limitations of their time there, but one can’t help but feel a more interesting doc could have been assembled on life and hockey behind the iron curtain. But with a worldwide pandemic still raging, who knows when they’ll let any foreign film crew north of the DMZ again?