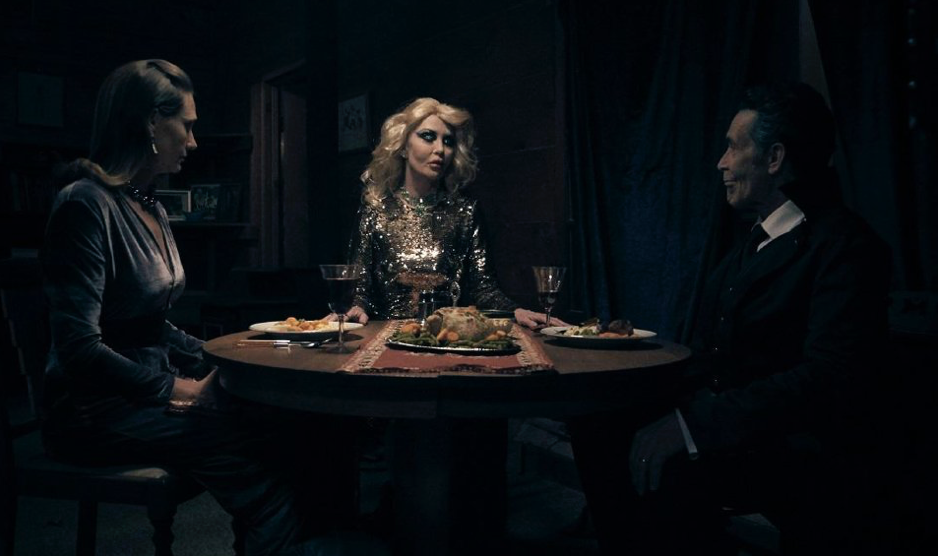 Don’t you think this is a little odd?

Oklahoma-based director Mickey Reece has almost self-deprecatingly referred to his filmmaking style as “people talking in rooms”. Still, David Mamet once said that that’s all you really need as a starting point for compelling drama. While the content of the dialogue between the acid-tongued characters of Reece’s latest feature Climate of the Hunter may seem obtuse upon first viewing, you can’t help but be drawn to the screen purely by the way it all unfolds.

Reece does his best to unbalance the viewer from the get-go, framing the narrative in the near-extinct academy ratio (1.37:1) and placing all the opening credits on a single card. We are thereafter introduced to sisters Alma (Ginger Gilmartin) and Elizabeth (Mary Buss). The latter is a Washington DC socialite visiting the former who has retreated to a secluded life in their jointly-owned country home. They are both awaiting the arrival of mutual friend Wesley (Ben Hall), an aging playboy adept at spinning yarns spliced with the odd cosmic jargon.

He’ll spin a few over the course of several unusually elaborate meals which remain largely unconsumed. The characters are far more enveloped in a mental chess game upon each piece moved will reveal the true past, relationships and especially true nature of the participants. I firmly believe in (mostly) spoiler-free reviews so I’ll leave it to my readers to enjoy the dessert course of this increasingly surreal affair.

Reece has assembled some of the Sooner state’s finest thespians for his suspended-in-time romp (word of God suggests the year is 1977, but who’s to say?). Hall practically tantalizes the available senses as the enigmatic Wesley. Gilmartin tugs at the heartstrings as the adrift Alma and while Buss could dial back from eleven somewhat, she leaves an lasting impression as third-wheel Elizabeth.

The show has its technical merits in check with textured production design, haunting orchestration and cinematography occasionally rendered in tableau. I did find it curious however that several of the nighttime scenes are rather poorly lit, forcing the use of noise-riddled gain in several shots. Needless to say they don’t cut well together.

For whatever Climate of the Hunter appears to lack in clarity, it strives to make up for in sheer re-watch value for it’s borderline absurdist trappings. We’re still in a pandemic after all, so you’ll certainly have the time.

Climate of the Hunter debuts on VOD Tuesday, Jan 12 (today!)