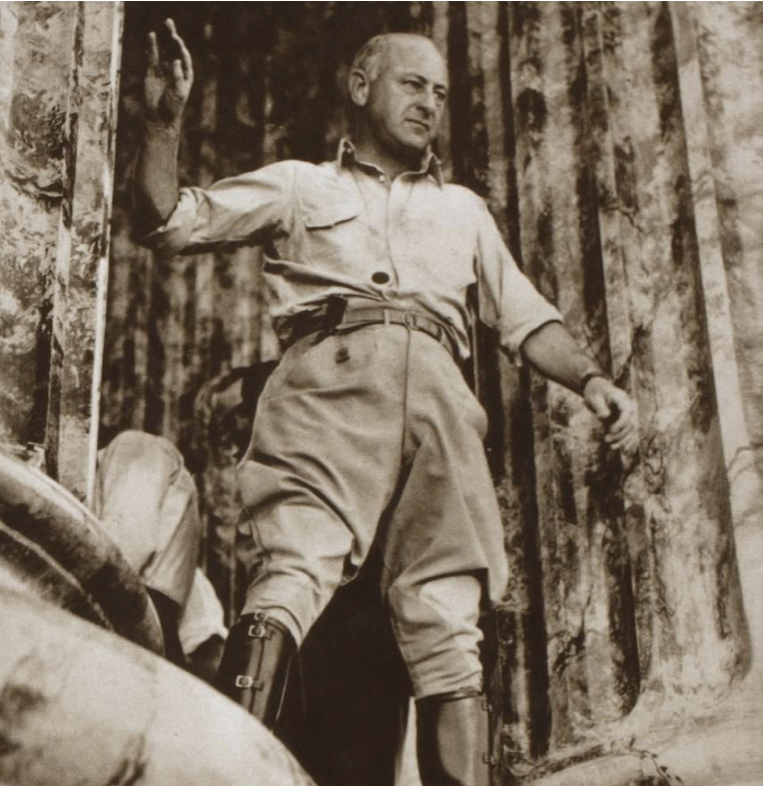 There’s almost no film director of whom I can think of whose most successful and beloved film was their last. Cecil B. DeMille went out with a bang when his 1956 Technicolor Biblical epic The Ten Commandments swept the box office, critic’s top 10 lists, awards nominations and audience hearts. While this was clearly a crowning achievement, the septuagenarian had no intention of retiring with films on the founding of the boy scouts and space exploration in the works. But a series of heart attacks brought on by overwork and old age would ultimately fell the filmmaker at age 77 in 1959, marking the end of one of the most consistently critically and commercially successful film directing careers Hollywood has ever known. DeMille directed 70 feature films between 1914 and 1956 and each one is rendered as a chapter in Robert S. Birchard’s meticulously researched tome, Cecil B. DeMille’s Hollywood.

Despite being intimately associated with the medium, DeMille didn’t first call “Action” until his early thirties, having spent most of his professional life on the legitimate stage. His various cracks at actor, writer and producer had failed to yield any lasting success and opportunity on the stage was growing narrower as film began to graduate from single-reel “Nickelodeons” to hour-plus feature-length presentations. DeMille and several stage collaborators including producer Jesse L. Lasky and future-movie mogul Samuel Goldfish (later “Goldwyn”), saw the writing on the wall and decided to strike while the film reel was hot. By the end of 1913, all three had moved from the stage to the screen business as cameras rolled in the newly-minted film community of Hollywood on a screen adaptation of the hit play The Squaw Man. In the director’s chair was DeMille.

Despite a steep learning curve (Oscar C. Apfel shared directing duties on that first picture), DeMille benefitted from the growing feature film craze and scored a hit right out of the gate. Having decided to make his relocation to California permanent, DeMille embarked on a break-neck schedule of pictures over the next decade, directing thirteen in 1915 alone! Each of DeMille’s 70 features is chronicled in its own chapter which are headed with data including cast lists, filming dates, release dates, budgets and theatrical grosses. The usual favourites including The Greatest Show on Earth, King of Kings, Samson and Delilah and Union Pacific are all here as well as under-appreciated gems like social satire Four Frightened People and oddities like romcom-turned-disaster epic Madam Satan.

Whether you’re a lifelong DeMille devotee or have never seen his work beyond an Easter screening of Ten Commandments, there is a real treasure trove of information packed into the book’s 400 pages (don’t forget the endnotes!). We get to know the man professionally through how he worked from prep to shooting to editing and screening. He often worked with a steady cast of collaborators behind the camera including writer Jeanie MacPherson, cameraman Alvin Wyckoff, composer Victor Young and editor Anne Bauchens and with stars Gary Cooper, Claudette Colbert, Gloria Swanson and Charlton Heston in front. He wasn’t one to lavish completely on stars however as DeMille often showed generosity to actors from the silent days who struggled in the industry’s transition to sound, finding bit parts in his sprawling epics for the likes of Hobart Bosworth, Florence Turner and William Farnum.

The chapters greatly benefit from Birchard’s exhaustive research through what must have been countless studio memos, personal letters and news items which all coalesce to create a working picture of the nuts-and-bolts work that went into pictures of Hollywood’s Golden era. We learn what actors were considered for parts (DeMille liked to screen actors previous work as opposed to traditional auditions), incidents that occurred during shooting (a Hawaii shoot nearly sunk under the stress of illness and equipment malfunction) and the various studio politicking which at one point forced DeMille out of his home studio of Paramount for seven years (he found a temporary home at MGM). So many details, dates and figures are thrown your way that you’ll almost feel as if you’re researching a DeMille book yourself!

In fact, the book’s biggest shortcoming is that it often can’t see the forest for the trees and often sacrifices important information in lieu of heavily researched minutia. Despite the overwhelming technical detail divulged about each film, we’re often not even given a basic plot synopsis. DeMille made The Squaw Man three separate times and I’m still not sure what the story is! This also has the effect of DeMille’s death from a heart attack in 1959 seem rather anticlimactic as less than one page is devoted to the director’s passing.

Excelling in the details if not the big picture, Cecil B. DeMille’s Hollywood earns a place on the bookshelves of hardcore film buffs seeking more than general overviews and vague outlines. It may not score as well with those looking for a more general introduction to one of cinema’s all-time great directors who might be better off starting with a more traditional biography like the author’s own, published shortly after his death in 1959.

Cecil B. DeMille’s Hollywood is now available in a paperback edition from the University Press of Kentucky on Amazon and other retailers