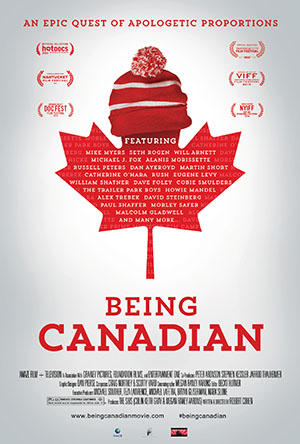 At one point Robert Cohen, the writer-director of Being Canadian, parks outside his old high school. He wants to prove wrong the teacher who told him he’d never amount to anything. He yells (from inside his car): “I’m directing a movie, bitch!” He then peels out and onto the highway.

He should not be so proud.

Throughout Being Canadian, a documentary-meets-road trip film, Cohen seeks the answers to many questions Canadians ask themselves: Why do we act so polite? Where does our inferiority complex come from? What do other countries think about us? Why do we produce so many comedians? They don’t dig very deep, but they’re the kind of inevitable topics that come up on holidays or at the cottage or during a late night with friends.

Speaking of which, Cohen gets his answers from his famous Canadian friends, most of whom he met working in the entertainment business. In the past, Cohen has written for The Big Bang Theory, According To Jim, and Just Shoot Me. This work history directly influences the kinds of jokes Cohen makes throughout the film. They are the lowest hanging fruit. They are so low hanging they are pineapples, which grow on the ground.

As Cohen travels from Nova Scotia all the way across to British Columbia, he repeatedly makes jokes at the expense of others, which is something many of the interviewed Canadian comedians (Eugene Levy, Mike Myers, Catherine O’Hara, Seth Rogen, Ben Stiller, Dan Akyroyd, Martin Short, Caroline Rhea) say Canadians do not do. It adds a through-line of disingenuousness, for which Kathy Griffin brutally scolds Cohen.

I do think, however, the film is a success in a way. By baiting these famous Canadian figures with nationalistic questions to participate in the doc, it’s at least interesting here and there, if only because one wonders what these people, most of whom America has – for all intents and purposes – adopted, think of their country.

This film is worth watching as long as you can’t find cherry picked interviews on YouTube instead.