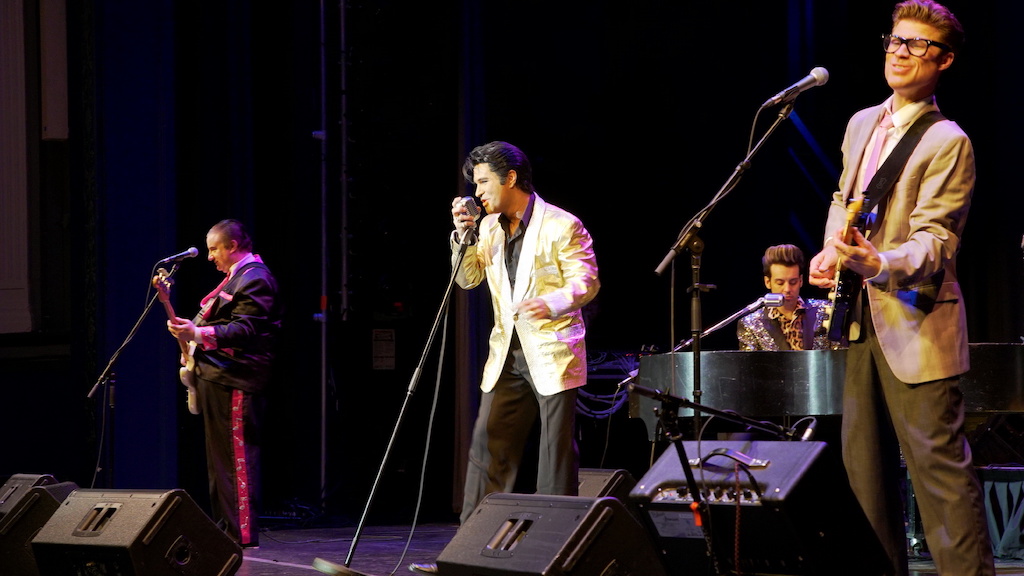 I discussed celebrities (sort of) on Monday, and we all know being famous is a difficult road to get to, but what about being almost famous? Well, there are two ways down that route. The first is being in something that went downhill a little too quickly. The second is being a celebrity impersonator or in a cover band of some sort. There aren’t many documentaries about celebrity impersonators or cover bands (that I know of) so Almost Almost Famous was a newish concept that told an interesting story about a band of impersonators on tour. This band is known as the Class of ’59 and it features celebrity impersonators in the style of an all star band.

The members consist of Bill Culp as “The Big Bopper”, Jeff Giles as Buddy Holly, Lance Lipinsky as Jerry Lewis, Ted Torres as Elvis, Bobby Brooks as Jackie Wilson, and a couple other musicians accompanying. Managed by Marty Kramer, the band makes quite a big tour which miraculously sells out at every show because artists tend barely tour anymore except for maybe reunion tours and once in a blue moon tours. But it also sells out because there are so many elderly people who want to go back to the good old days of 60 years ago and not get disappointed by some subpar impersonator in a dollar store wig. But it’s not an easy gig, as impersonators tend to be in a very competitive gig, I nearly went through this myself (long story) and as the tour goes on, we get treated to some of the performers musical origins. Marty had experience working with celebrities until the work finally stopped. Lipinsky originally started out as an Elvis impersonator before he became a Jerry Lewis lookalike in Las Vegas. Brooks raised himself with the aid of God and joined the navy for a while, and there’s so much more from the other band members.

As we explore these impersonators’ stories, friends and family members of their past explain their impact and journeys in great detail. Between these people’s historical tales, we get treated to the hardships of touring, such as band members running late, Marty’s pushy attitude as he stresses over the time constraints, random emergencies caused by stunts in the past, and the band members going too far with their arrogant egos. It’s a very descriptive documentary that explores quite a few different sides of the band members not just in moods, but stories both past and present. The interviews are highly detailed, and details in particular are peppered between each other in a pattern that’s well put together. The B-Roll footage is also professionally done and you can really feel the stresses and moments of relaxation for the band members. It’s not a common concept to cover the details of a cover band as much as one of the real ones. While not much different from documentaries of real bands, it still shows a certain blend of uniqueness, probably due to the fact that I’ve never seen a band like this before… though I may have brainstormed something like it myself. Still, it’s a great documentary and I would recommend looking at it. Whether you grew up with these musicians or not, or if you’re into this kind of music at all. There’s a chance you might enjoy this music more than the modern beep-boop these days.

Almost Almost Famous will be on the CBC Documentary Channel this Sunday, December 16th at 9pm ET and PT.