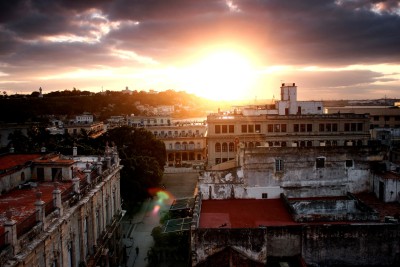 If you had a three-day vacation in Havana, what would you do with it? Jack Petty (Gil Bellows), gets more than just a simple chance to relax, he gets into a lot of trouble. When you look like a character from a Beastie Boys music video, things are bound to get out of hand for you.

As Jack makes his way into Havana, it’s revealed he’s there for business purposes, strictly about insurance. Already, the trip is off to a good start, as he bumps into a gangster-like person at the airport, and of course deals with a fortuneteller who tells him he has a very bad future ahead of him. While hanging out at a bar, Jack meets a man named Harry Smith (Greg Wise). Harry offers to show Jack around Havana and they tour the area together. As they hang out together, some of the local women reveal that their nickname for Harry is Padre.

Harry goes to meet his mother, a broker, mainly because he owes her an apology for messing up an assassination. Harry’s mom tells him to head out to go take care of someone who hasn’t paid their bills. But first he and Jack party and bring home two women named Day and Night. Harry goes too far when he overdoses on drugs and tells a funny story about a bottle on the street. But when Harry is found dead the next morning, Jack finds himself in Harry’s place, and in even more trouble when one of Harry’s business associates storms in. Jack does not know what’s going on and has to play along. The associate gives Jack a gun and a picture of Harry’s next target. Jack is now unsure of what to do to make it out of Havana alive.

The shots of Havana were very impressive and added quite an artistic detail, even though the story went slowly as to showing Jack’s adventures. The interrogation scenes were nerve-racking. The concept was a mix of adventure and action, adding basic buddy-like adventures, evolving into a crime incident getting out of hand. For something that probably could’ve been cheesy beyond compare, this actually happened to be pretty intense. Things really pick up after over halfway in, and even before that, it still has some interesting points.