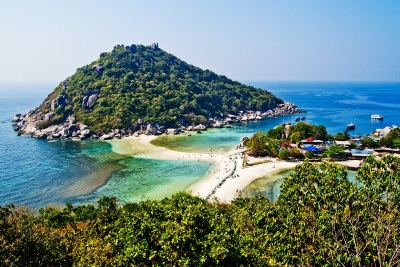 A film released in 2006, 1st Bite is about a traveling chef named Gus (David La Haye) who tries to learn to be the master of cooking and later on, a lover.

We start out with an opening narrative about death being the beginning of another journey. We then cut straight to a Thai restaurant. Gus’ boss tells him while his food does not have zen, Gus still does a good job. But Gus is intent on finding out the zen of cooking. Later on, he’s summoned out by a customer who says he felt like the food killed him and sent him to heaven. Shortly afterwards, the customer collapses due to food poisoning. Gus is sent away by his boss to a remote Thai island where he can learn the true zen of cooking.

After some adventures around the island, Gus meets a woman named Lake (Napahpapha Nakprasitte) who tells him the zen cooking expert has died. After a rather confusing conversation about her, Lake decides to let Gus stay with her. Over time, she teaches Gus the techniques and they begin to bond together. Lake doesn’t want Gus to leave, but he feels he needs to escape for his own safety. Eventually  he joins an institution for enlightenment.

After learning a lot, Gus finally goes home and tries to go back to the restaurant where he once worked. He puts his newly learned lessons to the test by serving an elegant omelette to a customer named Rose (Leah Pinset) and her husband, Theo (Michael Ironside). Theo is amused by Gus’s work and decides to offer Gus a job as a chef. (Theo: “I fired my chef this morning so I could give you the liberty of taking his job.”) Gus works in his old restaurant for a while, which is under new ownership. Soon Gus starts feeling like he needs to go back as he has this haunting feeling that he made a mistake leaving Thailand.

This  wasn’t really much of a story, the plot hardly went anywhere, the subplots did even less, the lead actor didn’t do much for acting, the music is extremely minimal and of course there isn’t very much effort put into this. At one point during a party scene, instead of a simple camera shot change, they do a transition fade. Plus it seemed like the camera operator was more drunk than anyone at that party. It’s depressing to see Canadian films that are so horribly done.