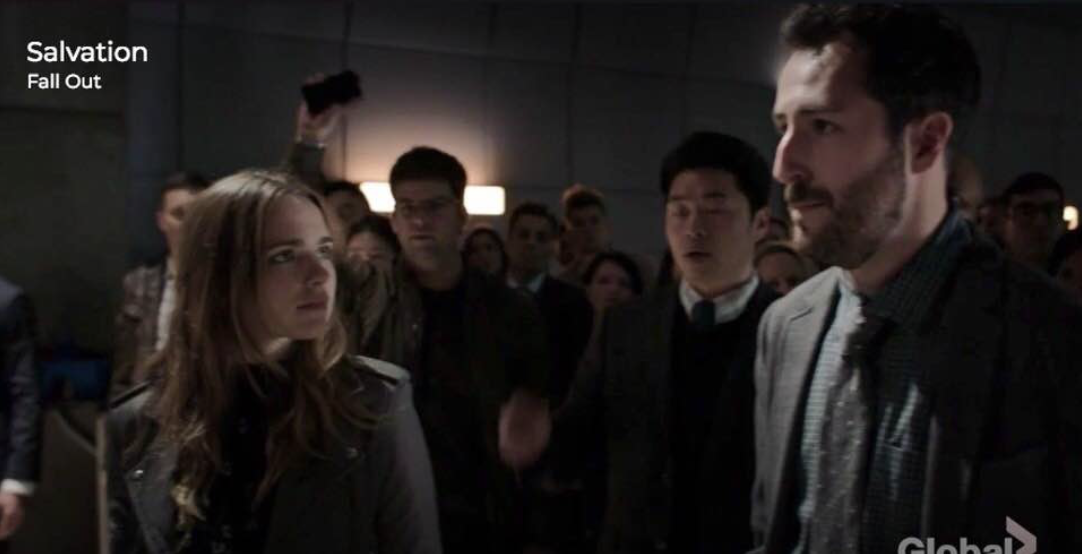 It was an unusually warm and sunny March in Richmond, BC. Folks cycled and walked along the riverside path, birds chirped as jets took to the sky from neighbouring Sea Island, and in an unassuming warehouse nearby, over 100 people were locked down inside an underground bunker, sheltering from rouge Russian missiles.

Or at least that’s the tale the cameras for the CBS sci-fi drama Salvation wished to convey. Like my previous background gig Colony, it too was a tax-credit refugee, this time from Vancouver’s east-side rival film town, Toronto.

The second season opener “Fall-Out” was having key scenes shot on a huge converted warehouse set on River Road. Depicting an “Ark” of which most of us were “denizens”, the set featured roof-high shelves of supplies on one side, temporary housing pods in the middle and a giant green screen with which to apparently digitally insert a towering rocket marking the north end of the complex. A more intimate aquaponic garden set flanked the rear corner while beyond lay trucks worth of grip and camera equipment.

At three days, it was the longest background shoot I’ve ever been a part of and the most prominently I’ve been featured as a background player (friends and family would later get in touch to see if it was actually me). More foreground than background this time. I neglected to take a “before” photo.

This job was also a milestone for me as it forced me to shed the beard I had sported for nearly a decade. Hair & Makeup felt that a clean-shaven-yet scruffy luck would be more befitting and for the first time since 2009, my chin and upper lip saw sunlight. It was a more youthful look I would keep for a year.

Our first major scene involved us denizens attempting to get reception (using fake phones supplied by props) only be be told by series co-lead Grace Barrows (Jennifer Finnigan) that contact with the outside world is impossible. This greatly upsets the blue collar Joe Riggs (Aaron Douglas) who violently attempts to break through the locked elevator with an axe.

At least that was how the scene was supposed to play out.

On the second or third take, Douglas ran head on toward the doors shouting “I’ve got to get back to my family!”. He slammed into the doors as scripted, only this time the facade gave way causing him to stumble into an empty shaft. Calling on the powers of improv, Douglas threw his arms skyward, loudly proclaiming “my family!!”. The entire set roared with laughter.

The scene ended with Finnigan appealing for the crowd to help organize food and temporary shelters. The assistant director encouraged us to randomly raise our hands and say “I’ll help.” To this day I remain convinced that should have technically given many of us a pay bump as the thin distinction between background and actor is spoken dialogue. I guess that cheque’s still in the mail.

Scenes on the second day were more mundane and principally left us to improv after we were placed by the wranglers. Erecting sleeping pods, walking and mouthing lines during a mess hall scene, etc. I was likely captured in the wide shots, but was largely left to the cutting room floor as the action gave way to actor close-ups.

The third day was easy in the sense that we had to just essentially play dead in order to simulate a mass fainting following an oxygen leak. Harder in the sense that we had to be carefully placed on the floor to avoid knocking skulls once we awoke from out temporary coma. Once we hit what felt like Take 30, we began to wish we actually had passed out as the concrete floor did everything in it’s power to be un-ergonomic.

As busy as the set was, there was plenty of downtime in holding which I chose as an opportunity to brush up on my card game skills. I started with a two-man game of Gin Rummy but as our table neighbours spotted the deck, this promptly gave way to the more intense game of the “Snap!” variety. Exciting and high stakes to be sure, but a little too stressful for my blood. I stepped away a few times to let the deck work its magic.

While you will no doubt see many famous faces during background work, it is considered unprofessional to talk to the actors on set and certainly forbidden to ask for autographs or selfies. So besides those precious seconds between “action” and “cut” we don’t see much of the stars.

Salvation proved to be the exception as we were visited on our final day by series regular Jacqueline Byers who portrayed sci-fi writer Jillian Hayes. She popped up to the holding room and briefly addressed the crowd, thanking us wholeheartedly for an amazing job during the long set hours and how we were appreciated. It was a real class act and a touching gesture.

NEXT: How to ride the subway in SUPERGIRL.